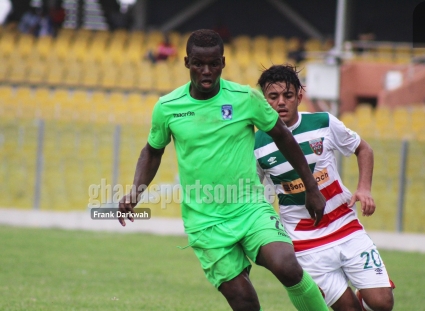 Bechem United striker Ahmed Simba Toure has described the game against Accra Hearts of oak as a training match after he scored the only goal to snatch victory from the Phobians.

The striker increased his tally for the season to nine goals after he converted from the spot in the 70th minute to beat Hearts in the match day 21 of the Premier League.

The former Kotoko striker was once on the radar of the rainbow club but move to the FA Cup holders rather and has since had a fine season.

The Burkina-be was reacting to Sunday’s victory on Kumasi based Radio Station Metro FM when he spilled the bean from the bag.

It was like a training match for me. I didn’t train on Monday and Tuesday. I only started training on Wednesday ahead of the game and for me it was more like a training session. Their (Hearts of Oak ) defenders could not mark me in the game. It was that easy for me but that is football,”  he told Metro FM.

The win lifts the hunters to the seventh position with 29 points and will next travel to Sogakope to play league leaders WAFA.