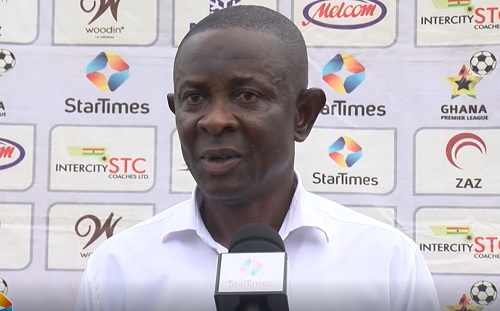 The head coach for Bechem United, Kassim Mingle has blamed his team’s defeat to Hearts of Oak in the MTN FA Cup final on what he says is poor officiating.

The highly-rated tactician was in the dugout on Sunday evening when the Hunters locked horns with the Phobians in the finals of this season’s MTN FA Cup.

Although Bechem United would score the first goal of the match, Hearts of Oak came from behind to win 2-1 at the end of the 90 minutes to lift the enviable trophy.

Speaking in his post-match interview, Bechem United head coach Kassim Mingle stressed that his team would have won the match if not for a needless red card given to one of his players [Augustine Okrah].

“We played very well in the first half but the match official gave a needless red card. We should have won this match,” Coach Kassim Mingle said.

Courtesy of the win for Hearts of Oak, the team will represent Ghana in the CAF Confederation Cup next season.