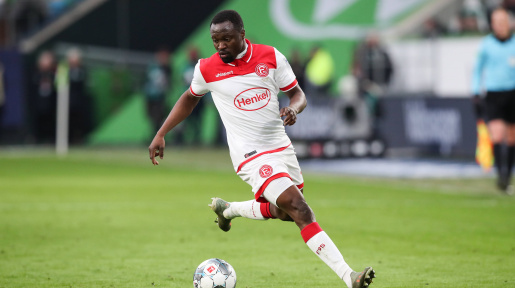 Which of the continent’s stars failed to impress this term?

The one-time wonderkid appeared destined for great things when he broke into the Schalke 04 team and was named in the Ghana team at the 2017 Africa Cup of Nations.

He made his debut at that tournament but has made precious little progress—at least in the international arena—since.

After making over 30 appearances at SC Paderborn last term in the German second tier, this was meant to be a campaign of progress for Tekpetey, having moved to Fortuna Dusseldorf in the top flight.

He’s been a shadow of the player who was so influential as Paderborn were promoted last term, failing to score in nine appearances this season, although at 22, he still has time on his side.

Algeria’s Belfodil will be desperate to see the back of the 2019-20 season.

After netting 16 goals for Hoffenheim last term, the North African has failed to score this term, seeing minimal gametime due to fitness concerns.

Club doctors failed to spot a cruciate ligament injury suffered last year, and instead, the player played on without diagnosis nor treatment.

When the injury was eventually identified, Belfodil was so unhappy with the club’s perceived incompetence, that he revealed there was no longer any trust between employers and employee.

It’s surely inevitable that he moves on this summer.

While his Liverpool teammates were conquering English football and winning the Premier League, Awoniyi moved to Mainz on loan, looking to prove to Jurgen Klopp just what he could offer the Reds.

Admittedly, the 05ers have struggled, but Awoniyi has had limited impact.

He didn’t score his first Bundesliga goal until mid-May, and that performance was to remain an isolated high spot of a disappointing campaign.

The forward’s season was curtailed when he suffered a head injury against Augsburg, and he’s done little to suggest he can be a key contributor at Anfield.

It’s been a disastrous season for Kalou, whose time at Hertha Berlin has come to an ignominious end.

After six years, he’s bound for Brazil’s Botafogo, and they’ll be hoping to get more out of the former Chelsea man than Hertha did during his final season in Germany.

He made just one start during the first half of the campaign, was told midway through the year that he was deemed surplus to requirements, and has spent the last six months watching on as his teammates eventually returned to action.

He was criticised publicly by Hertha for publishing a video in which he broke social distancing rules, a move which appeared to threaten the return of Bundesliga action post-coronavirus.

There were hopes, when Lookman returned to Germany with RasenBallsport Leipzig after failing to make an impact at Everton, that he could rediscover the form he’d demonstrated during his first spell in the Bundesliga.

Back in the 2017-18 season, the young Anglo-Nigerian forward had scored five in 11 in the German top flight, but failed to score at all in 11 appearances (of which only one was a start) this season.

While many of Leipzig’s young African stars enjoyed excellent campaigns, boosting their reputations in the process, Lookman has watched on from the sidelines.

Could he yet leaving a lasting impression on the 2019-20 season during the latter stages of the Champions League?