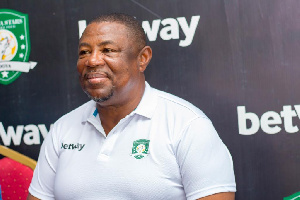 Fabin, who recently joined the fire boys ahead of the 2022/23 Ghana Premier League in his encounter with the club fans said he was shocked that a club like Goldstars were able to beat Aduana Stars last season at the Nana Agyemang Badu Park.

However, the CEO of the Bibiani-based club has expressed his displeasure about Fabin’s statement, revealing the gaffer wanted to coach Goldstars after securing promotion to the Ghana Premier League.

“A coach shouldn’t talk like that and that is why I am so much disappointed in somebody like Paa Kwesi Fabin who sees himself as a national team coach, we don’t communicate like that because Barcelona were beaten by Alcorcon in Spain’

“Fabin has not done proper research about Goldstars and Aduana Stars meetings in Dormaa. We defeated them at the time they won the league and were unbeaten at home. So, his comment does not merit the situation at all”

“At the time we qualified for Premier, Fabin was lobbying to become our coach but I didn’t even look at his CV, I think that will be one of the reasons why he is making such comment” he told Wontumi FM.