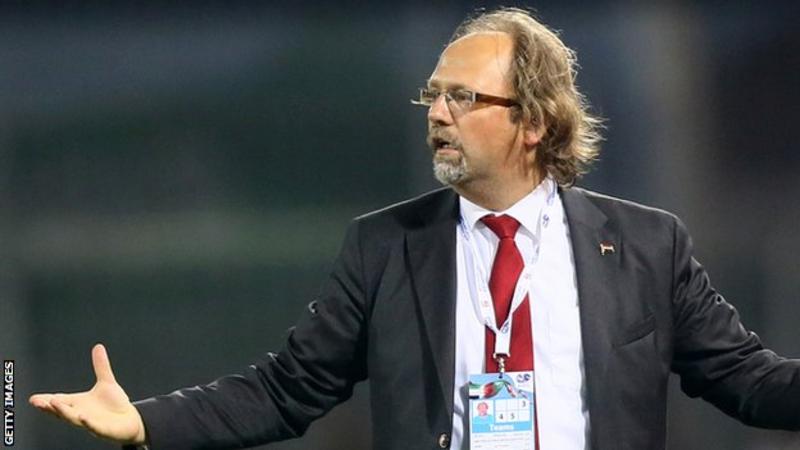 National team managers should have input on any vote about making the World Cup a biennial event, says The Gambia coach Tom Saintfiet.

Arsene Wenger, head of global development for the world governing body Fifa, has suggested overhauling the international match calendar from 2024 to have fewer international breaks and more meaningful matches.

The heads of Fifa's 211 national associations are set to decide on the proposals put forward by the former Arsenal manager in December.

"I believe that coaches are more important in this case because it's a technical matter," Saintfiet told the BBC's World Football podcast.

"Presidents are not always as occupied with the technical part of it and the complexity."

Saintfiet, along with over 100 other international coaches, took part in virtual meetings with Wenger earlier this month.

"Consulting us was a very good step forward," the Belgian added.

"The frequency of the World Cup has no influence on the chances that a smaller country will qualify because the Fifa rankings always give the advantage to teams who are higher-ranked, and they have easier groups to qualify.

"Probably, the same 50 countries will qualify every two years for such a World Cup. If you don't change that, it will be always the same countries who qualify."

One of Wenger's proposals is condensing international matches into just one or two windows per year, rather than five in the current calendar.

Saintfiet thinks seeing players more frequently is crucial and, having managed countries in four different Fifa confederations, believes national managers must have their voices heard in the discussions.

"One thing that Wenger said was that he has no experience as a national team coach," Saintfiet, 48, said. "He looked from the point of view of the Arsenal manager.

"That's naturally quite important if you have someone in charge of such a topic who never coached a national team, who has no experience on that level, who has the other side; working in the Premier League, always playing Europa (League) games and focussing on that.

"If you're a coach of a European national team, you have different problems and fewer problems than if you're coaching in Africa, Asia or Latin America.

"I raised these points and I got a lot of support from all the coaches in a similar situation - the coaches of Sudan, Bahrain, Central African Republic and Fiji.

"I know that not every coach wanted to raise their voice because it's sometimes quite impressive to have a gentleman such as Arsene Wenger saying something, but we as coaches have to defend our business and knowledge.

"I've worked for 12 years as a national team coach on four continents.

"That experience, no-one has in Europe or even Mr Wenger doesn't have that experience. Hopefully, Fifa and the people who take the decision will listen."

Saintfiet recently led The Gambia to qualification for the Africa Cup of Nations for the first time, with the Scorpions in Group F alongside Tunisia, Mali and Mauritania for the tournament in Cameroon in January.