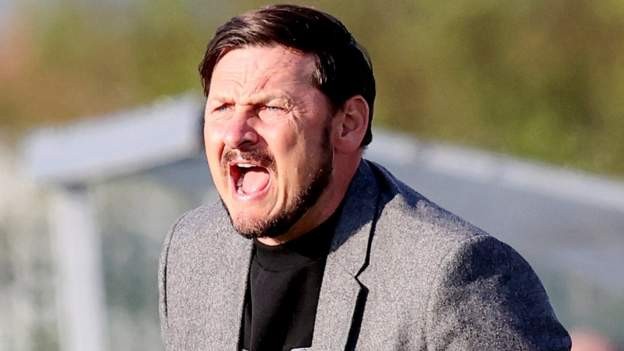 Marc Bircham has suggested that he was sacked as manager by Waterford for not guaranteeing that he would select the son of club owner Richard Forrest.

Bircham's comments, made on Talksport, came after he was dramatically sacked by the League of Ireland club on Tuesday, three days before they take on UCD in a promotion/relegation play-off.

BBC Sport NI has contacted Waterford to ask for a response to the former Queens Park Rangers and Millwall coach and player's latest remarks, but the club said it will not be commenting.

His dismissal on Tuesday came within an hour of Bircham tweeting that he had been given a week-long suspension by Waterford following a text exchange and disagreement with Forrest.

The former Canada international then told local radio station WLR that he first learnt that he had been sacked when he read the club's statement on Twitter.

Bircham went on to claim that he had been forbidden from contacting his players by the club's owner.

That prompted a further statement late on Tuesday afternoon from Waterford, this time a personal one from Forrest, in which he said he was "extremely disappointed to have had to make this tough decision we did today especially given the huge match we have facing us on Friday".

"Our relationship was strained because I'm not a yes man," Bircham told Talksport on Thursday.

"The owner has his son [defender George Forrest] at the club and I didn't play him. About a week ago, I told [chairman] Mitch Cowley that he wouldn't play for me next year because I'd be bringing in better players and he might not be on the bench in the play-off.

"I'm not part of the future because I won't play his son. I'm a man of principle and it has cost me managing the play-off final, but I'd do the same again."

Waterford have brought in ex-Tottenham defender Ian Hendon to the coaching staff to help prepare the team for Friday's play-off at Richmond Park.

Hendon, 49, has previously managed Barnet and Leyton Orient at English Football League level, and most recently took charge of Gibraltar side Europa Point.

Bircham became Waterford's fifth manager in a year in May, taking over with the side bottom of the 10-team Premier Division.

Results improved and they finished 27 points ahead of bottom side Longford Town, narrowly missing out on outright survival.