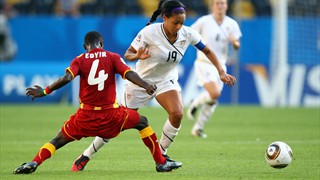 Black Queens defender Janet Egyir has reiterated the WAFU Cup of Nations is good preparations ahead of the Africa Cup of Nations to be hosted in Ghana later this year.

The Black Queens emerged victorious at the just ended competition, after beating host Ivory Cost 1-0 in the final.

Defender and player of the tournament Janet Egyir insists the success chalked at the WAFU Cup of nations is good preparations for the team ahead of the hosting of the Nations Cup in Ghana.

Egyir scored three goals from five games and was phenomenal in the tournament.

"It is a good preparation for us ahead of the African Women's Championship,'' she said.

''You are aware we are not involved in the qualifications so this is good for us as we continue our preparations."