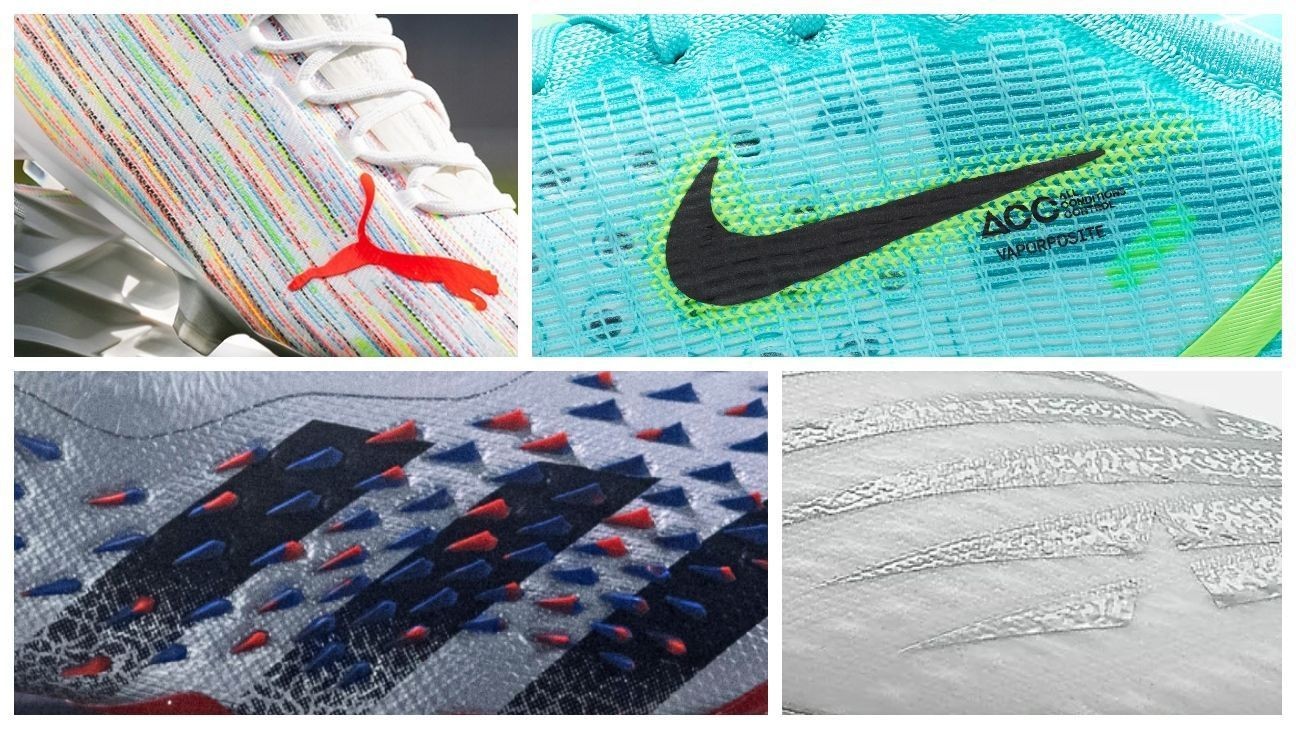 Which boots will the world's greatest men's footballers be wearing this summer? We break it all down. ESPN

There's no greater opportunity for boot manufacturers to show off their wares than the major tournaments that dominate the summer. A year later than planned, the best of the Old World are gathering to contest Euro 2020 this summer, while the hottest talents of South America are competing for the Copa America.

As such, the likes of Adidas, New Balance, Nike and Puma have fresh boots to grab your attention. So, with the help of our FC 100 annual list of football's best men's players, we detail what the game's greats will be wearing at the Euros and the Copa, and what makes them stand out.

Adidas Almost a quarter of the world's top men's players in ESPN's FC 100 will be wearing Adidas boots this summer. Adidas

Twenty-three of this year's FC 100 will take part in the Euros or the Copa wearing Adidas, whose Showpiece pack will adorn the brand's X Ghosted and Predator Freak boots. Silver Metallic serves as the base colour -- just as it did for the Three Stripes' wares at Euro 2016 and the Copa America Centenario -- and is accented by Team Royal Blue and Scarlet, making for a sharp, classic-looking design. As for the Nemeziz and the Copa Sense, neither will get the Showpiece treatment, with both continuing with the colourways launched in the spring: the white, Core Black and Screaming Orange for the former and the white-with-pops-of-neon Inner Life pack for the latter.

X Ghosted Ballon d'Or contender N'Golo Kante will be one of 12 FC 100 players wearing X Ghosted at the Euros or the Copa this summer. Adidas

What Adidas says: "X Ghosted is designed to be a lightweight speed boot that feels fast when placed on the foot thanks to insights from the running track, where marginal gains on the clock define the game."

Predator Freak Paul Pogba will bring plenty of attention to the Predator Freak should France make a deep run at the Euros. Adidas

What Adidas says: "Predator Freak [was] created to transform athletes' play and to enable improved control on the ball."

Nemeziz The Screaming Orange of the Adidas Nemeziz will be hard to miss at this summer's tournaments. Adidas

What Adidas says: "Nemeziz is built for the most agile and multidirectional players. Created specifically for those who play unpredictably and beat all opposition with spectacular flair, footwork and movement ..."

What Adidas says: "Designed from the inside out using anatomical insights on the human foot, Copa Sense features new Adidas design innovations ... to deliver an enhanced feel and optimum touch for the wearer."

There's only one FC 100 athlete at the Euros or Copa not wearing Adidas, Nike or Puma, and that's Raheem Sterling after New Balance announced in May that the England international had joined their ranks.

Who's wearing them: Raheem Sterling.

What New Balance says: "Our Furon V6+ Pro ... provides the simplified sensation skilled players are looking for. This minimalist cleat gives you the feeling of direct contact with the ground and ball for an unrivaled feel."

Every boot in Nike's Impulse pack features the uniquely fresh trio of Dynamic Turquoise, Lime Glow and Aquamarine, perfectly sliding along the colour spectrum between blue and yellow. Twenty-four of our FC 100 players performing at the Euros and Copa will rock water-inspired boots, giving fans plenty of opportunity to take in the depths of these colours.

Phantom GT The Phantom GT has been adopted by some of Nike's greatest creators and finishers alike. Nike

What Nike says: "The design of the Phantom GT used ... digital data sets to create a boot built to help perfect feel on the ball and unleash a player's creative skills."

What Nike says: "The design of the new Mercurial draws on the natural geometry of a dragonfly's wing as a guide to driving maximum efficiency with minimal weight. This results in a lightweight, efficient boot stripped to seven key components, each made visible for an arresting aesthetic that relays the pure essentials of speed."

Tiempo Liverpool duo Jordan Henderson and Alisson will all be wearing Nike's Tiempo this summer. Nike

What Nike says: "Premium leather has always been the signature feature of Nike's iconic Tiempo franchise. For the Tiempo Legend 8, the timeless leather exterior is combined with a highly modernised interior to deliver a technical beast of a boot."

Puma Puma's Spectra pack is a colourful yet simple concept that grows increasingly interesting the longer you look at it. Puma

Seven of our FC 100 will don Puma's Spectra pack boots at the European Championship and Copa America. Bands of refracted colour beam when set against the bright white of the Ultra and Future Z, setting up what promises to be mesmerising visuals when Neymar sets out on his summer of stepovers.

Ultra Sergio Aguero leads a blossoming stable of Pua athletes wearing the Ultra at the Euros and Copa. Puma

What Puma says: "Following years of testing and player feedback from some of the world's best attacking players, including Antoine Griezmann, Sergio Aguero and Nikita Parris, the Puma Ultra is engineered to deliver the game's fastest football boot."

What Puma says: "The Future Z has been engineered to enhance the playing style of the world's most exciting and entertaining players. Built around an adaptive ... compression band, the boot provides optimal lock-in and support for explosive movements."