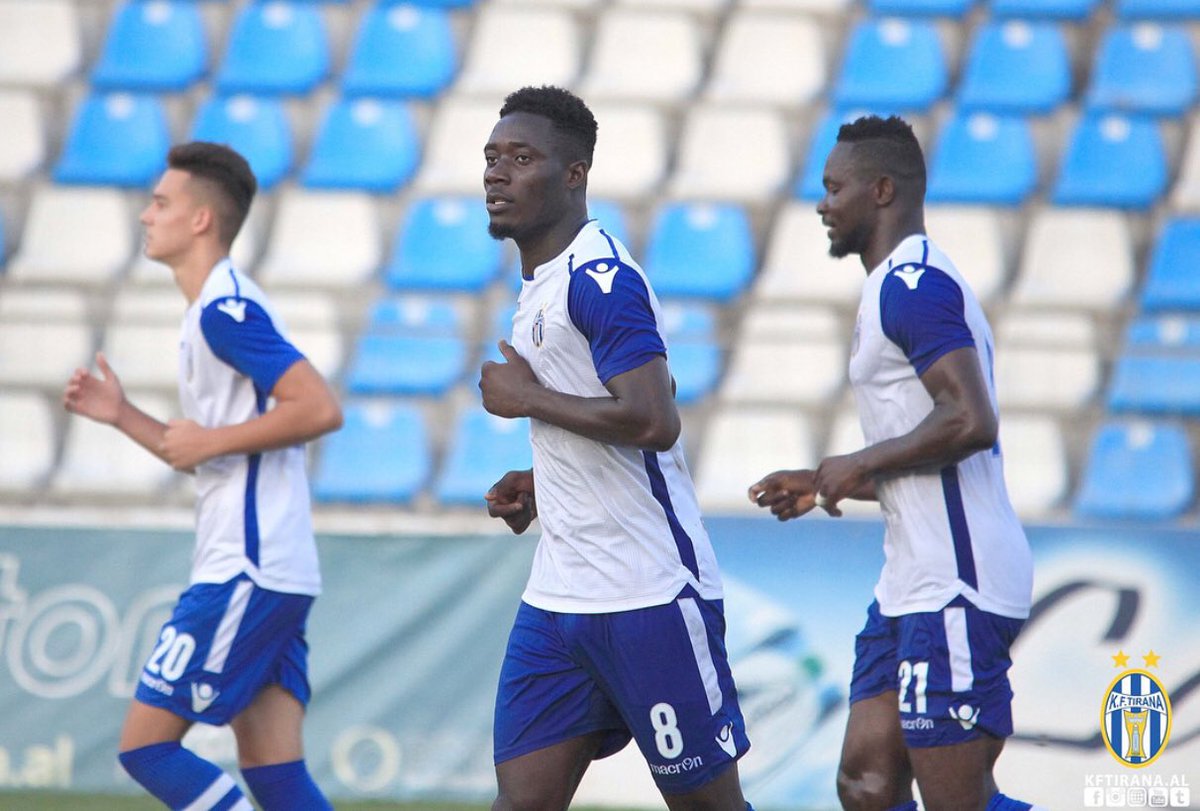 Cobbinah, who ply his trade for Albanian top-flight side FK Tirana was hit with the shocking sentence at the Tirana court on Tuesday after he was found guilty of forging his residence permit.

Despite being sentenced into prison there is big relief for the player as he was declared a person of exemplary conduct. In spite of that, the judge commuted the sentence to 100 hours of community service.

Cobbinah's good conduct since his move to Albania means that the judge asked him to serve the community for 100 hours because 'he is not a threat to the society', judge said when issuing his ruling.

This means the humble Ghana star walks free from any confinement in prison and can continue to play for his top-flight side FK Tirana - the club he recently helped to win the title.

Cobbinah landed himself in an unnecessary trouble when the police authorities in Rinas with a forged residence permit, which sparked his problems, caught him.

It is an unnecessary problem as he is legally entitled to a residence permit in Albania because he is legally and gainfully employed by one of the biggest clubs in the country.

His problems became known last month when the country's President Meta granted him an Albania passport within a record eight hours to enable him qualify as an Albanian player.

This would have helped FK Tirana to buy more foreign players to boost their squad to play in European competitions but the opposition party led by the Prime Minister publicly clashed with the country's president over the award of the passport.

The falsification of documents was hanging around Cobbinah's neck before he was handed the Albania passport to help him play for his club in the Europa League.

Albanian President Ilir Meta was accused of granting Cobbinah citizenship without verifying that there are criminal proceedings against the footballer, which has led to a national debate.

President Meta's issue escalated to the point that even the opposition party led by Prime Minister Edi Rama accused the country's leader of abetting in the forging documents to grant Cobbinah Albanian citizenship.

Given that the Ghanaian has not spent five years in Albania, the decision by the President of the country - who is also an ardent supporter of KF Tirana - to hand citizenship to the Ghanaian speaks volumes of how he is rated in that country.

Many also view this move by the Albanian government as an attempt to convince Cobbinah to switch nationality to play for them even though he has been invited to the Ghana senior national team a couple of times.

But with the softening of the nationality switch regulations of FIFA it could be a move by Albania for them to get him to play for them even though Cobbinah has not expressed interest in playing for him.

Other also say that  the Albanian club side Tirana want him to play in UEFA club competitions as a native so they can bring in more foreigners.

Cobbinah follows other African football players including the well-known Abraham Alechenu, Charles Ofoye and James Adeniyi who have all received Albanian passport in the past.