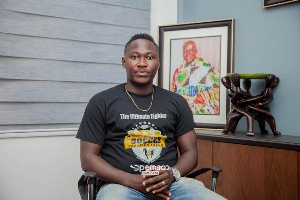 Former Kotoko forward Eric Bekoe has disclosed he will not return to the pitch again as he ventures into coaching.

Bekoe, 34, has been appointed to lead Division Two club, Nsawkawman FC as head coach on a year deal.

However, in an interview with S.K Ntim of Bryt FM, the former Black Stars goal poacher revealed he will soon hang up his boots as he set sights on unearthing talents for the national teams as a trainer.

“Very soon i will retire, in whatever I do, I don’t rush because at the end of the day I am not into competition with anyone but as a star like me, I owe people the notice I have retired today or tomorrow”

He continued that, “My management has to plan very well towards my retirement but for now as the main commodity I have to do well with my club as coach. Imagine if the season start and I am in a good position with my team and the program comes on, you can all imagine” he said.

Quizzed if he will accept offers from clubs as a player, he said, “It will be difficult for me"

Bekoe became a household name during his spell with the Kumasi based club, netting 42 goals in 48 matches for the club and was part of the squad that won the Ghana Premier League in 2008 and went to the group stages in Africa.

The enterprising forward capped 12 times for the Blacks Stars.