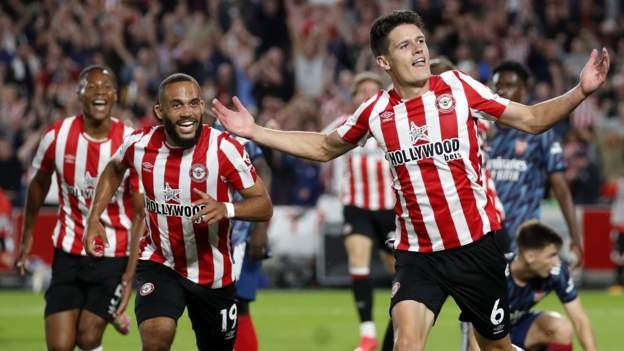 Brentford will wear their 2021-22 home kit again next season in an attempt to be more sustainable and save fans money.

"We believe in football being affordable for our fans and are aware of the need for the game to become more focussed on sustainability," said Brentford chief executive Jon Varney.

"It is only a little thing, but we believe it will help."

A shirt made from polyester - as most football shirts are - has more than double the carbon footprint of one made from cotton (5.5kg of carbon dioxide per shirt compared to 2.1kg).

Even recycled polyester takes hundreds of years to decompose and can lead to microfibres escaping into the environment.

Varney told the club websiteexternal-link: "Whilst it is not normal practice for Premier League clubs to roll a kit over for two seasons, fans have told us that they would be in favour of the savings that a two-season shirt would provide.

"When we discussed the idea, everyone at the club was fully behind it.

"We also think this is a step in the right direction to help the environment a little. It can only be good to reduce kit cycles."