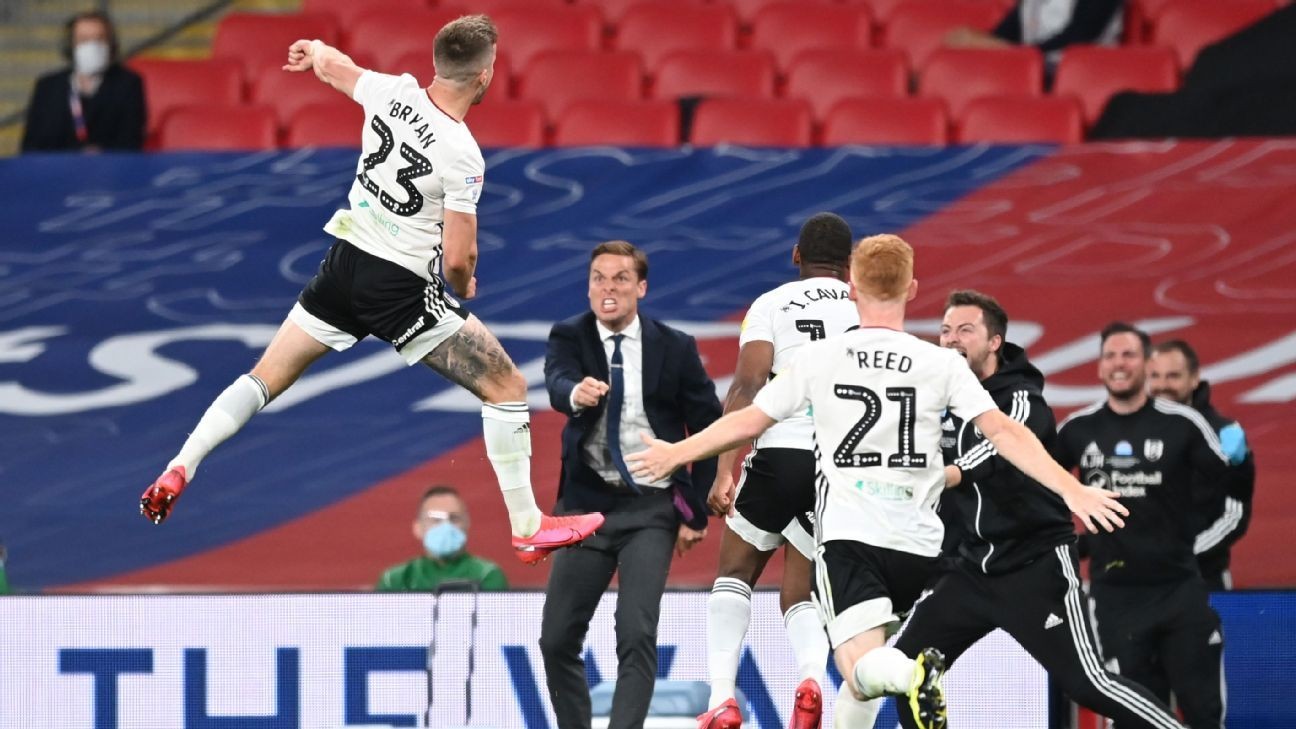 It took a moment of individual brilliance to decide this 367-day long Championship campaign and book Fulham's place back in the Premier League.

Of course this game went to extra time -- in this never-ending stream of football and intermingling seasons -- and after 105 minutes of both teams cancelling each other out, it was the quick-thinking of Fulham left-back Joe Bryan that broke open the Premier League treasure chest and left their local rivals Brentford staring at another season in England's second tier.

And then, for good measure, Bryan -- who had scored just once this term prior to Tuesday's game of riches at Wembley -- followed up his wonderful free kick with a second superbly-worked goal in the 117th minute as he ended this chess match of a game by smashing the board over Brentford's head. Brentford grabbed a late consolation, but by that time the Fulham bench and their other staff were already celebrating and looking forward to their spot back at the top table.

Fulham boss Scott Parker said they had "deep wounds" that needed to heal after they were relegated from the Premier League in 2018-19. The club he inherited back in February 2019 was one used to losing. Now they've re-found that winning touch, but Parker knows the Championship playoff final win is only half the battle to getting Fulham back to the club they want to be. But they've got the platform now to build on.

Fulham managed this final win perfectly and the 2-1 scoreline was fair. They went against their expected style of containment and counter and instead controlled possession, prodded and pressed and then waited for their opportunity. There'd been half-chances aplenty in the regular 90 minutes -- it was only in the first minute of extra time that the first clear cut opportunity presented itself, to Brentford's Ollie Watkins -- and it took the narrowest glimpse of opportunity for Bryan to finally swing the game Fulham's favour.

"I'm not the hero," Bryan said post-match; try telling that to the Fulham fans inevitably spilling out of west London pubs singing his name.

Fulham had practised the set piece all week -- noting Brentford goalkeeper David Raya strays off his line at free kicks. So as Bryan eyed up his teammates from 38 metres out just slightly out on the left, looking like he was going to cross to target man Aleksandar Mitrovic, he remembered what his father taught him when they were playing in the park: Never tell the opposition what you're thinking with your eyes. Bryan then drilled the ball into the near post and past a flailing Raya. In the eerily quiet Wembley, the shouts of delight and surprise broke the night sky and then the 26-year-old added another for good measure.

Ripping up tactical responsibility and positional sense, Bryan surged forward, exchanged a one-two with substitute Mitrovic, fit only for the bench, and gave Parker's side an unassailable two-goal buffer.

The game had the choice of two scripts: the one we wanted to see would have seen chance after chance, both goals taking a peppering and sporadic shout of glee reverberating around an empty Wembley. It needed the teams to find their own tempo in a game void of atmosphere. Brentford had their much-admired front three of Said Benrahma, Bryan Mbeumo and Watkins; Fulham had their own fire power. Surely there'd be goals...

But then there was the other script. The one where in this endless season, the game went against expectation and hope. The risk was, due to the understandable magnitude of the match, fatigue and how close the two teams were in the regular season (Brentford finished in third, Fulham fourth, due to a single goal differential) that they'd spend the match sparring, and cancel each other out.

The game took on the second narrative: Attritional football, pressing, counter-pressing, error and running down blind alleys with quality chances at a premium. So amid the suffocating, claustrophobia of a place in the world's richest league on offer -- something both managers had asked their players to ignore through the week, "it's just another game" they'd have said (it's not) -- it needed a moment of quick-thinking and individual brilliance and it was Brentford who blinked first.

Joe Bryan was the difference-maker as Fulham pipped Brentford and sealed a return to the Premier League. Shaun Botterill/Getty Images

"It was fine margins," Brentford manager Thomas Frank said after the match, and Parker knows that too.

His Fulham side have come in for flack this season as with the depth of quality in their squad, they were expected to have gone up automatically, but Parker knew it was going to take time. He said the culture he inherited when he took over at Fulham was broken; it needed a rebuild.

"When everything's going at 100 miles an hour, you lose sight of certain things like family. There would've been times I'd have broken, but there's an amazing network and family that have helped me stay strong," Parker said post-match, his thoughts and voice intermingling as he attempted to make sense of his own emotions.

But he has brought clarity all season. He did it by keeping the group together, finding a system that fitted his team, made them tough to break down and then had enough firepower to cause their own problems. That they did this largely without injured Mitrovic at the business-end of the season, who missed both legs of the playoff semifinal, is testament to the work of Parker and his backroom staff.

They focused on building the pressure on Brentford, playing 4-4-2 instead of their usual 4-1-4-1, and became the pressing side, instead of counter-pressing.

Brentford, for their part, never got going; they'll look back at the two chances they spurned at the end of the season to secure automatic promotion when they lost to Stoke and then Barnsley with regret, but now they'll have to pick themselves off the canvas and work out how to break this hoodoo that's seen them lose their last nine playoff finals. They'll also have to fend off interest for their wonderful front three, and other key figures like Rico Henry. Do that and they should be back here or hereabouts next season, but this will hurt.

"This is football, you don't always get what you deserve," Frank said. This was meant to be the perfect ticket to their opening night at their new stadium a mile from their beloved old Griffin Park home.

But instead it's their neighbours, four miles down the road, hugging the bend of the Thames in their old Craven Cottage home -- which is having its own face lift in the Riverside Stand's redevelopment -- who will be looking down on them from the Premier League.