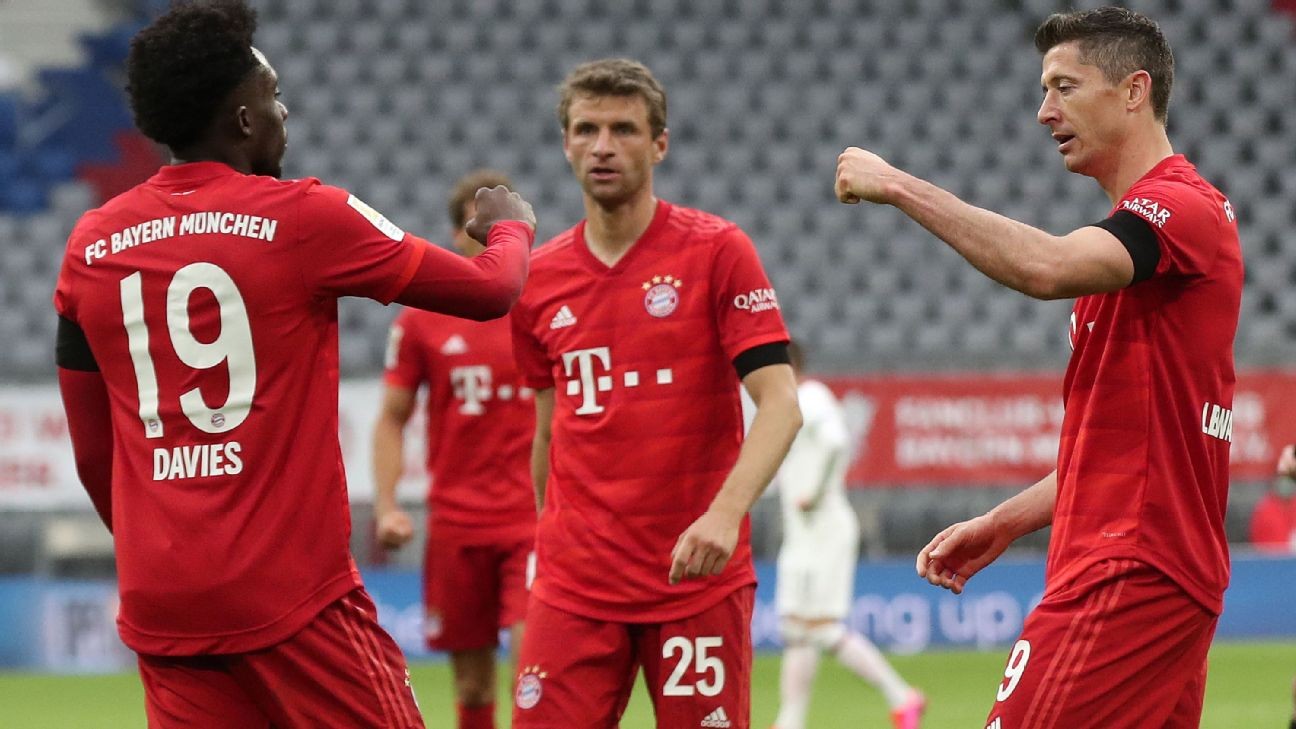 Ahead of Der Klassiker on Tuesday, matchday 27 of the Bundesliga season was about Bayern Munich and Borussia Dortmund maintaining momentum as Germany's top flight played a second weekend of games following a two-month shutdown due to the COVID-19 pandemic.

Seven-time defending champions Bayern began the day four points ahead of their great rivals and that is the way things stayed after both clubs won, although the leaders were forced to work harder than they might have expected, while Dortmund possibly lost a key defender in their victory.

After initial intrigue and adjustment to the new normal, close attention was again paid to celebrations and whether players could remember not to congratulate their teammates in the traditional "social distance-defying" manner. As with last week, most managed -- elbow-taps have become customary -- but some did get over-excited.

Meanwhile, the sight of empty grounds continues to be stark and it will take time to get used to the sound of boot on ball, as well as the echoing of players' shouts. Borussia Monchengladbach offered their own take on how to fill seats with thousands of cardboard supporters.

Gladbach had little to cheer about as the prodigious Kai Havertz produced more game-changing moments for in-form Bayer Leverkusen. At the other end of the table, the battle to avoid relegation continued and Werder Bremen earned vital points.

Bayern given a fright but stay four clear Bayern Munich have won 12 of their last 13 Bundesliga games.

In the end, it was a procession for Bayern Munich as they dispatched Eintracht Frankfurt 5-2, but a shaky five-minute spell early in the second half will serve as a valuable lesson against complacency for Hansi Flick's men, with Dortmund lying in wait.

When Robert Lewandowski's header made it 3-0 to the home side after 46 minutes, the points appeared to be safe and attention began turning to Tuesday's clash in Dortmund. But Frankfurt defender Martin Hinteregger grabbed a consolation, followed by another three minutes later and, for the briefest moment, the champions looked rattled.

Though Alphonso Davies would grab Bayern's fourth and an own goal added a fifth, that spell showed defensive lapses from set pieces that must be addressed. Having stunned them 5-1 back in November and with memories of their 2018 DFB-Pokal final win not too distant, Frankfurt against showed they can bloody Bayern noses.

Niko Kovac's time in charge ended after the November humbling, since when Flick has restore order at the Allianz Arena. Several key men have rediscovered top form and Thomas Muller is a prime example of the difference between the two eras.

His stylish finish on Saturday was his seventh goal since Flick took charge, to go with 13 assists and the new contract he signed in April. Under Kovac this season, by contrast, Muller scored just twice and there was speculation that he could leave the only club for which he has played.

Leon Goretzka netted an outstanding opener after 17 minutes and such was Bayern's dominance that by half-time, other than ex-Munich midfielder Sebastian Rode, the next-highest touches from a Frankfurt player was goalkeeper Kevin Trapp.

Hinteregger's double gave the away side some hope, but the outstanding Davies restored a two-goal lead and, after Manuel Neuer made an outstanding save and Filip Kostic rattled a post, Bayern made the points absolutely safe when Serge Gnabry forced a comedic own goal from Hinteregger.

This was a day that saw the two sides of Bayern, with hints of defensive fallibility suppressed by the ruthlessness of their attacking options. They cannot afford to switch off at the Westfalenstadion, against the likes of Erling Haaland and Jadon Sancho, though.

Dortmund earn efficient win, but Hummels is a concern

"We are playing Wolfsburg today," Michael Zorc warned when asked about Tuesday's potential title decider between Borussia Dortmund and Bayern Munich on Tuesday. Zorc has been at BVB forever, first as a player and later as a sporting director, so has seen it all and many times. He knew his club faced a real test on Saturday.

The hosts had taken just one point from the last 27 available against Dortmund, but went into the game unbeaten in seven and much improved under Austrian coach Oliver Glasner. However, they failed to show up at the Volkswagen Arena in the first half and could force their way back into the game after the break.

Dortmund needed the win and got it, with midfielder Julian Brandt providing more magic. The German international initiated the move that led to the opening goal just after the half hour; wing-back Raphael Guerreiro -- scorer of two goals against Schalke o4 last week -- on target again after the otherwise quiet Erling Haaland could not reach Thorgan Hazard's cross.

It was a game to watch Dortmund's bench. Emre Can came on at half-time for Mats Hummels, who was withdrawn with an achilles problem that could make him doubtful to face Bayern; England international Jadon Sancho, still working is way back to full fitness after a calf injury, came on to set up Achraf Hakimi for the second goal; American youngster Gio Reyna replaced Hazard soon after Dortmund doubled their lead.

With eight minutes left, Wolfsburg substitute Felix Klaus was harshly sent off by referee Daniel Siebert after a VAR check and Dortmund cruised home. Sure, their defense struggled more in the second half, but ahead of the Westfalenstadion showdown in three days, when Sancho and Can will be expected to start, Lucien Favre's side did what was needed to put the heat on Bayern.

Geisterspiele here to stay All eyes were on the stands at Borussia Monchengladbach's stadium.

Football cannot control a pandemic and the Bundesliga -- wary of the ongoing coronavirus threat -- knows it can only provide a framework to restore parts of normality. Last weekend's first matchday came and went without any major fallout and viewing figures across the world showed that many people had been longing for live sport, but games lacked intensity.

But DFL CEO Christian Seifert admitted on Friday that "normal" football would only return once fans are back in stadiums and protesting against the authorities, telling the Suddeutsche Zeitung: "That's somehow also part of our football culture."

Before the sport shut down in March, the relationship between the league and clubs on one side and fan groups on the other hit a new low when protests against Hoffenheim's billionaire owner Dietmar Hopp turned into a general debate about club ownership.

The pandemic's impact has meant increases to the risk of financial trouble for clubs and the likelihood of limited spending, but despite their absence, supporters of several clubs have nonetheless made their presence felt and continued to attack the league, the system and its place in society.

At Monchengladbach on Sunday, where some 13,000 cardboard cutouts of fans were placed on the seats, a banner read: "Silent faces, cardboard reminders: Football without fans is nothing! For Borussia, against games behind closed doors!" Fans will not return before September at the earliest, though, which means the "ghost games' we see now will be around for some time.

With Kai Havertz's burgeoning reputation continuing to soar, Bayer Leverkusen's impressive run of form showed no sign of abating as they saw off Borussia Monchengladbach in front of 13,000 cardboard cutouts of fans at Borussia-Park.

Leverkusen were much the better team, with Havertz superb as he grabbed a brace to make it 11 goals in 15 games in 2020. Operating as a false nine, the 20-year-old neatly side-footed the opener after seven minutes and added a second-half penalty after a lengthy VAR check that included a pitchside monitor consultation from referee Soren Storks.

Sven Bender made the points safe with a header that ignited enough excitement to contravene social distancing guidelines for celebrations, as Leverkusen leapfrogged Monchengladbach into third. The hosts' goals came from Marcus Thuram, but that aside Gladbach were poor and their increasingly frustrated manager Marco Rose was warned by Storks.

John Brooks (Wolfsburg) and Josh Sargent (Werder Bremen) got starts on Saturday, with Giovanni Reyna (Borussia Dortmund) getting 13 minutes off the bench and Timmy Chandler (Eintracht Frankfurt) also coming on as a substitute.

Though Brooks was on the wrong end of a 2-0 defeat at home to Dortmund, he managed to keep the previously prolific Erling Haaland quiet; the Norwegian striker's most important contribution was an air shot that inadvertently teed up Raphael Guerreiro for the opening goals.

Brooks had a chance to equalise in the second half but hooked a shot wide and was booked for a foul on Jadon Sancho minutes before Reyna, who was a late withdrawal from Dortmund's derby against Schalke last weekend through injury, came on with the points safe to get valuable minutes ahead of Tuesday's vital match against Bayern Munich.

With Sargent starting up front, Bremen got a huge 1-0 win at Freiburg to boost their survival hopes. As well as offering an attacking threat, the 20-year-old was defensively diligent -- an area he had been told to work on by manager Florian Kohfeldt -- winning four aerial duals and making three clearances before he was replaced after 63 minutes.

In the day's late kickoff, Chandler was introduced at half-time as Eintracht chased a deficit. However, playing on the left side, he was powerless to stop Bayern's attack adding three more goals and frequently put under pressure by the raiding Kingsley Coman.

Social distancing watch Bayer Leverkusen players got a little too close in celebrating against Borussia Monchengladbach.

After drawing criticism -- but escaping punishment -- last weekend for the way they celebrated goals against Hoffenheim, Hertha Berlin's players behaved themselves as they crushed city rivals Union 4-0 on Friday. The following day, though, Dortmund and Leverkusen contravened protocol.

A week after working out an iconic social distancing celebration against FC Schalke 044, BVB players hugged after their side's second goal, while Thorgan Hazard high-fived those on the bench when substituted. Leverkusen, meanwhile, had embraced when beating Werder Bremen on Monday and did so again at Monchengladbach.

Going into the weekend, the DFL urged clubs to observe the rules, pointing out that, in the event of any infections, doing so could be crucial to avoid local authorities putting entire squads into quarantine. However, while it remains to be seen if any action will be taken after the latest infringements, it seems unlikely.

Sources at Bundesliga clubs told ESPN this week that they believe the rule is just in place to ensure social distancing takes place off the pitch. Moreover, the advice to not hug after scoring is not part of the DFL's paper on how to bring back football.

In chaos before the enforced break, Hertha Berlin have picked up six points since games restarted, scoring seven and conceding none in the process. New coach Bruno Labbadia, the club's fourth boss this season following Ante Covic, Jurgen Klinsmann and Alexander Nouri, has steadied things and brought new ideas.

Friday's derby thrashing of Union Berlin was Hertha's revenge for an early November defeat to their cross-city rivals that came during a run of five straight defeats and saw fans riot and the manager's office appear to have a revolving door.

But under Labbadia, the club have an idea on the pitch for the first time this season; their latest outing saw young Brazilian forward Matheus Cunha, who arrived from RB Leipzig in the winter, score for the fourth time in only six matches.