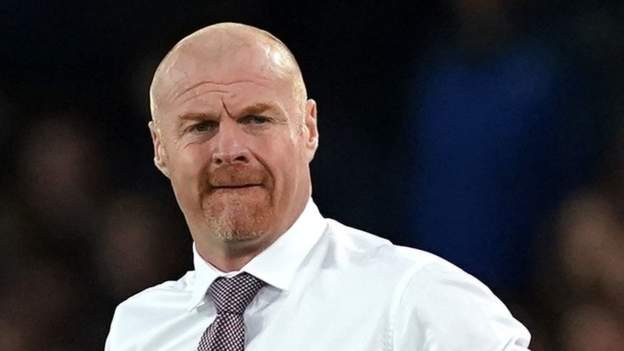 Burnley have sacked manager Sean Dyche with eight games left of their season in the Premier League.

The Clarets, who have lost five of their last six top-flight games, are 18th and four points from safety.

Dyche was the Premier League's longest serving manager, having taken over at Turf Moor in October 2012.

Burnley chairman Alan Pace said it was "an incredibly difficult decision" to part company with the 50-year-old, but "we feel a change is needed".

Dyche's last game in charge of Burnley saw them lose 2-0 to Norwich City, who are bottom of the Premier League.

"Firstly, we would like to place on record our sincere thanks to Sean and his staff for their achievements at the club over the last decade," said Pace.

"During his time at Turf Moor, Sean has been a credit both on and off the pitch, respected by players, staff, supporters, and the wider football community.

"However, results this season have been disappointing and, while this was an incredibly difficult decision, with eight crucial games of the campaign remaining, we feel a change is needed to give the squad the best possible chance of retaining its Premier League status.

"The process of replacing Sean has begun and further announcements will be made to supporters in due course."

Dyche had signed a new four-year contract until 2025 with Burnley in September last year.

During his spell at the club he guided them to two promotions from the Championship and two top-half Premier League finishes.

He also helped Burnley achieve their first European qualification in 51 years courtesy of leading them to a commendable seventh place in the Premier League in 2017-18.

However, the Clarets have won just four Premier League games this season, the worst win record in the league.

'The impact has to be absolutely immediate' - Analysis

Burnley are in their sixth successive season in the Premier League, which is their longest run in the top flight since their heydays in the 1960s.

It is a brave owner of any football club who just accepts relegation without doing something to stop it. Alan Pace, the owner and chairman of Burnley, is a relatively new owner and he has decided to act.

The impact has to be absolutely immediate and I guess that means Burnley picking up points immediately. They start against West Ham on Sunday, then Southampton and Wolves.

Sean Dyche is highly employable. Any like-minded club such as Burnley, Dyche will be top of the people who will be to be favourites to take over that job.

He has been linked with many Premier League jobs over the years. He has always responded to those rumours by saying he was at Burnley - now he is not. I don't think it will be long until he gets another job.

Clearly the problem for Burnley is getting another manager for themselves.