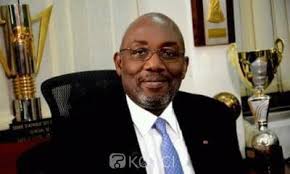 The President Confederation of African Football (CAF) Mr. Ahmad Ahmad has sent his sincere condolences to the Ivorian Football Federation (FIF) following the death of its President Mr. Sidy Augustin Diallo, who died on Saturday 21 November, 2020.

On behalf of the African football family and his own personal behalf CAF President Ahmad also extended his sympathies to the family, friends and loved ones of President Diallo.

In these difficult times, the CAF President also extended his deepest sympathy on behalf of the Executive Committee and himself.

“For the past 30 years, Mr. Augustin Sidy Diallo served football with immense passion, and his name will remain closely linked to numerous successes of the Ivorian national team,” Ahmad said.

Diallo was the Vice-president of FIF from 1991-1994, when they won their first African Cup of Nations Cup with the Elephants in 1992.In 2006, he was a key team member of the Ivorian federation that helped the country to qualify for their first Fifa World Cup.

He was elected the President of the Ivorian Football Federation in 2011 and helped them to win their second Africa Cup of Nations title in 2015.

President Ahmad said the heart-breaking loss of Mr. Sidy Diallo due to Covid 19 is a reminder to the entire football community ‘not to lower our guards against the pandemic’.

The CAF Medical Committee urges all to comply with the protective measures to guard against the deadly disease.