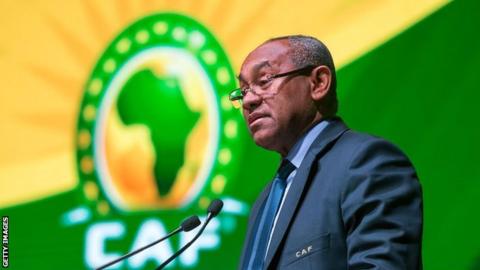 Confederation of African Football (Caf) president Ahmad is unable to enter the United States for this week's Fifa Council meetings in Miami because of visa problems.

The 59-year-old is a vice-president of world football's governing body by virtue of his position with Caf.

"I am sorry (but) I don't have more information (about his visa issues)."

"I just know that the President will be in Cairo (on Thursday)."

The Fifa Council meeting opens in Miami on Thursday and concludes on Friday, when the possible expansion of the 2022 World Cup from 32 to 48 teams will be discussed.

Madagascar's Ahmad was elected Caf leader in March 2017 on a platform pledging to fight corruption.

Nonetheless, he has faced recent criticism after being accused of violating the statutes of African football's ruling body when it came the redistribution of the 2021, 2023 and 2025 Africa Cup of Nations as well as various commercial deals.