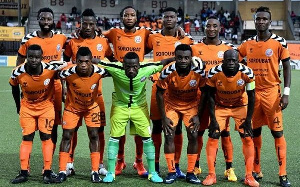 General Manager of Ivorian side San Pedro Abi Haidem is highly optimistic of a victory over Asante Kotoko in the CAF Confederation Cup final playoff.

San Pedro will lock horns with the Porcupine Warriors in the first leg tie at the Baba Yara Stadium on October 27 and the return leg in a week later in Abidjan.

“We had a little bit of fear when we saw we have been drawn with Asante Kotoko checking their clouds in African football. We are a small club but everything is possible in football,” he told Kumasi-based Light FM.

“Our (FC San Pedro) ambition is to climb this round to the group stages of the CAF Confederation Cup.

"We know Asante Kotoko is a big club in Africa with so much experience and pedigree but we are coming to beat them.”

“The second leg fixture of our game against Kotoko will be played in Abidjan not San Pedro.”