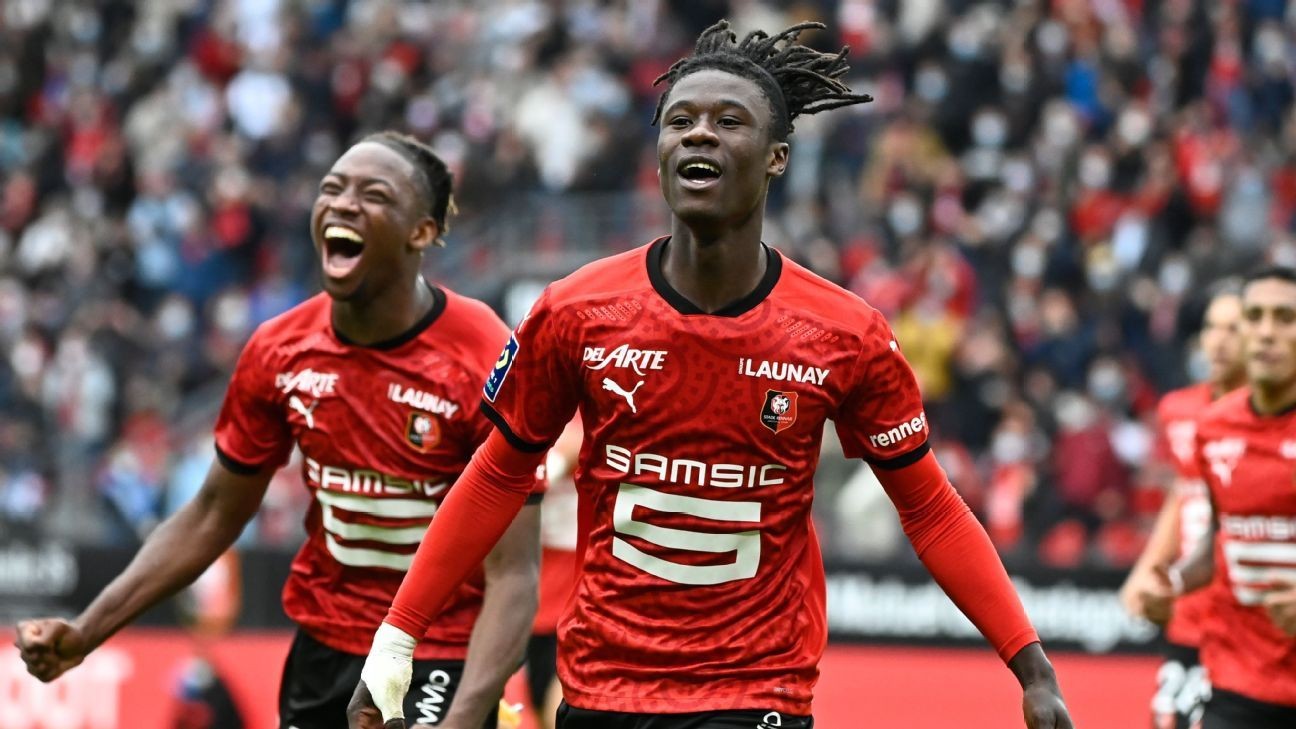 First times are always special. You try not to let your nerves get to you, or get too anxious. You try to take it all in and really make the most of it. Monday was a special day in the life of Eduardo Camavinga. At just 17 years of age, he became the youngest player since World War II to be called up for France.

The midfielder arrived at Clairefontaine just before noon, ready for lunch. You could guess as to the huge smile under his mask, with his usual dreadlocks held back with a headband. He kept it discreet with a Fendi jumper, beige jeans and Air Jordan trainers. Didier Deschamps welcomed him at the door like all the other players but maybe with even more attention. The France head coach knows he has his latest jewel on his hands.

Deschamps thought about calling him up earlier, but believes this was the right time. "I didn't pick him for the sake of it or to please him. The circumstances [Paul Pogba tested positive for COVID-19] meant that he came a bit earlier, but I know he has the potential," Deschamps told journalists on Monday.

When he fist-bumped Camavinga to say hello, the head coach could not help but make a joke as he always does. "Everything OK? Did you have a good weekend? I don't know, I didn't see anything," the coach told his new protege, laughing and of course referring to the fantastic goal the prodigy scored for Stade Rennes against Montpellier.

Camavinga had three words to really express his feelings: "joy, pride and excitement." As he explained to the media via video conference on Tuesday, "this is a child's dream, and I am still a child."

Imagine being 17 and finding yourself at dinner on Monday night, singing your initiation song in front of World Cup winners like Antoine Griezmann, Hugo Lloris and Raphael Varane.

"Playing for your country is something fantastic. It would mean so much to me and my family. I had to prepare myself for this day. I started really young in Ligue 1 [at 16]. You always hope to play for your country one day. Thanks to my hard work, it happened early," he told the media on Tuesday.

"I can't get too carried away, but I'm enjoying each moment. I don't feel any pressure. When you know that the head coach has faith in you, it is easier."

Yet from all the people inside the camp, the impression of the young midfielder is quite incredible. "Mature," "driven," "polite," "good values," "very talented" are the words coming back the most. Guy Stephan, Deschamps' assistant who has scouted Camavinga a lot over the past 18 months, was full of praise.

"He has no weaknesses. He can play anywhere in midfield. He is so good technically that he can find some passes that no other player can."

Stephan saw him play for the first time in July 2018 and was gobsmacked. Like everybody who has played with him, against him or watched him closely, it is very clear: Camavinga is a phenomenon.

We have seen young players struggle in the national team before because of the pressure, the expectations and the overwhelming sense of playing with the elite. Not Camavinga. At least, not now. At training so far this week, he has looked so composed, like someone who had been there for years.

"This is what has always amazed me about him. He is so talented, intelligent and mature that he always looks in his element. He is not fazed by anything," said his Rennes manager, Julien Stephan, who gave Camavinga his first-team debut in April 2019 at 16 years and four months old. "Every time, he has to go a step higher, he does. He is an incredible young man and an incredible talent." Since that debut, he has kept improving and only gotten stronger and stronger.

Camavinga's rise to the top is no surprise. From the first time you saw him play in the Rennes or France youth teams, or even in Ligue 1, his talent was so obvious that you knew he was aiming for the very top. He is well on his way. After leading Rennes to a best-ever, third-place league finish last season, he will discover the Champions League this year with the No. 10 on his back. He elected to stay on for at least one more season with Rennes, where he won the French Cup just over a year ago. After that, top clubs will again queue up to sign him, likely for over €100 million.

Whether it is on Saturday in Sweden or on Tuesday against Croatia, the youngster is sure to celebrate his first cap for France, the country he moved to from Angola aged two. This week, he is staying in Pogba's bedroom, one of the biggest at the Clairefontaine headquarters. There is a double irony there; Pogba has always been Camavinga's inspiration and it was fitting he was the one to replace him in the squad, too.

While he will have to turn the expansive bedroom back over to Pogba next time, Camavinga can get used to being with Les Bleus as there is no doubt it is where the youngster belongs.