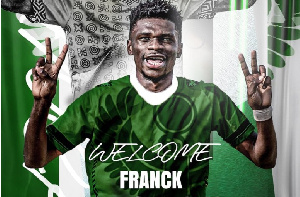 Mbella leave the Porcupine Warriors after spending just a year in the Ghanaian top-flight.

The forward who joined the club on a three-year deal before the start of the 2021/22 season became an instant hit, scoring 21 goals in the Ghana Premier League.

He became a subject of interest for several clubs but opted to join the Egyptian Premier League club.

After completing his move, the Cameroonian striker took to social media to thank Asante Kotoko and the fans for their unflinching support during his stay with the club.

“I come here to thank this great club Asante Kotoko for the opportunity. I enjoyed living in this family. Thank you so much supporters for the love and support. Thank you once again, thank you Ghana” he posted on Facebook.

Mbella becomes the 8th signing of Al Masry in the Egyptian window.