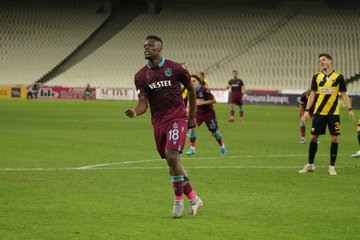 Ghanaian international Caleb Ekuban has scored a hat-trick this evening to power Turkish side Trabzonspor to a 3-1 win over Greek club AEK Athens FC at the Olympic Stadium of Athens.

The two European clubs locked horns in the first leg of the final qualifying round to the group stage of the 2019/2020 edition of the Europa League.

At the end of a pulsating encounter, it is the Turkish top-flight side that has secured an important victory ahead of the second leg of the tie that will hand a qualification ticket to one of the clubs.

Playing as the home side, AEK Athens took an early lead when Marko Livaja scored on the 4th minute with an assist from Helder Lopes.

They managed to hold on to the lead for 20 minutes but conceded a penalty on the 24th minute. Jose Sosa stepped up to convert the kick for Trabzonspor but failed to hit the target.

Four minutes later, Ghana’s Caleb Ekuban fed on a pass from Filip Novak to pull his side level.

The attacker showed hunger for more goals and got his second on the day with just a minute to end the first half. This time around, the Black Stars forward jumped highest inside the box to meet a perfectly executed corner kick by Jose Sosa.

Following a string of good plays in the second half, Trabzonspor cemented what went on to be a 3-1 win courtesy another strike from Ekuban on the 70th minute. He received a fine pass from Abdulkadir Omur and planted his shot into the back of the net.

That goal completed his hat-trick on the night and sends the Turkish giants into the second leg with a huge advantage as they bid to secure qualification into this season’s UEFA Europa League.