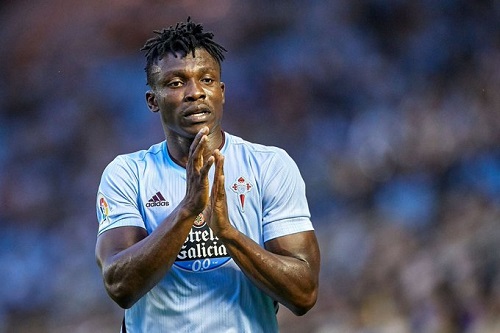 Ghana and Celta Vigo defender Joseph Aidoo has revealed that ex-Bayern Munich center-back Samuel Osei Kuffour is his mentor whiles citing that he is still learning from the legend.

Addo has developed into a fine defender in the last couple of years following his days with Belgian giants KRC Genk.

Now playing his football in the Spanish La Liga with the Sky Blues, the Black Stars man is even looking forward to improving his game. According to him, though he is working with teammates, he also watches videos of Sammy Kuffour to better his play.

In an interview with Joy Sports, Joseph Aidoo shared, “I'm Learning different areas of the game every day. Working well with teammates. Positive and negative, challenging that I worked to overcome”.

“I also study a lot from former players such as Samuel Osei Kuffour; I see him as my mentor...watching his YouTube videos always and I even had the opportunity to speak with him when the national team went to Egypt”.

The 23-year-old has so far played two games for Celta Vigo in the ongoing 2019/2020 and managed to impress in both matches.

The former Inter Allies captain looks to have cemented a place in the starting lineup of his new club and will be in action when they face Granada after the international break.