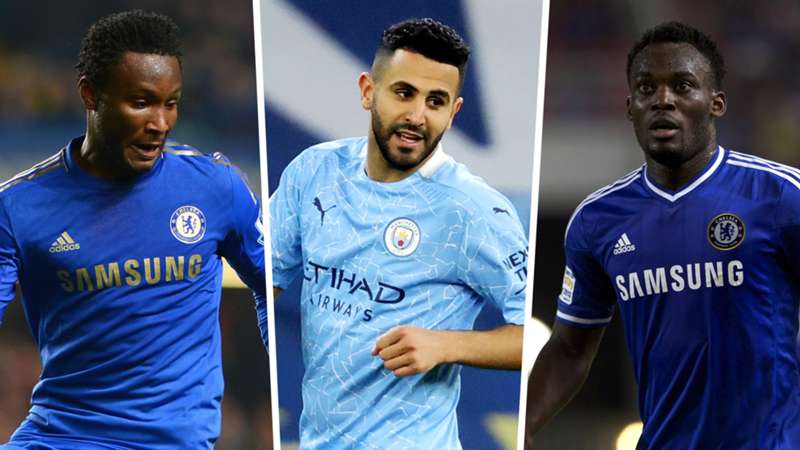 Ahead of Saturday's FA Cup semi-final, Goals ranks the top 10 Africans to have featured for either side.

A hardworking-if modest-operator, the former Real Madrid midfielder was primarily a squad player during his time at the club but one that was loved for his attitude and leadership skills.

A legend at Leicester City, where he inspired the Foxes to a miraculous title triumph in 2016, Mahrez has maintained his excellent form at Manchester City.

Perhaps he hasn't always made his mark in the biggest fixtures, but the Algeria maestro has already added a clutch of silverware to his name since arriving at the Etihad Stadium - including the Premier League title - and will expect more honours in the coming months.

He was also an Africa Cup of Nations winner with Algeria in 2019.

Toure was a part of Arsenal's 'Invincibles' squad that went on a 49-game unbeaten run in the 2003-04 season where he was a solid and commanding presence in the heart of defence, before moving to Manchester City at the height of his powers in 2009.

He spent four years there, and was one of the first pieces that were put together to form City's first title-winning side.

The defender moved to Celtic under ex-Liverpool boss Brendan Rodgers, winning a Scottish title, and is currently part of the Leicester City backroom staff.

Mikel arrived at Stamford Bridge amidst considerable controversy after a tug of war with Manchester United, and won all there was to win before leaving for the Chinese Super League.

He had a long and distinguished career at Stamford Bridge, and was also a Nations Cup winner with Nigeria in 2013.

He represented the Super Eagles at the World Cup in Russia in 2018 and later returned to English football with Championship side Middlesbrough and Stoke City.

Salah wasn't given ample opportunity at Chelsea, particularly considering what the forward has achieved since leaving Stamford Bridge.

Indeed, gametime was scarce in West London, but few could have foreseen Salah's progress in recent seasons.

He netted 32 times in the Premier League for Liverpool in his first campaign on Anfield, but only managed two in 13 for the Blues. Chelsea must surely regret offloading the Egyptian superstar, who is fast becoming a Reds great.

Salah was influential as the Reds clinched the UCL in 2019, and has since won the Premier League.

Essien arrived at Chelsea in a big-money transfer from Olympique Lyonnais, and his stay at the London club was nothing short of magnificent.

The Ghanaian powerhouse redefined the defensive-midfield position as a whole and was also a very efficient full-back when needed.

His 17 goals and 168 appearances speak for themselves, even if injuries ruined the latter stages of his career.

Toure is one of the most decorated Africans to have graced the game in recent memory, having won everything from the Uefa Champions League to domestic titles in Spain and England, as well as continental honours with Ivory Coast.

He boasts a CV that speaks volumes of his talent and he is undoubtedly one of Manchester City’s best signings ever.

After initially being overlooked by Guardiola in the Premier League, Toure fought back to recapture a key role for the Citizens, and ended his time at the club with a final winner's medal.

Weah has done what most African players can only dream of: win the Ballon d’Or.

The three-time African Footballer of the Year, nicknamed King George, moved to Manchester City when he was 34 years old, after a loan spell at Chelsea.

The current Liberia President joined the Citizens towards the end of an illustrious career in world football, and was unable to produce the goods, leaving the club only three months after joining.

He made seven appearances for the Manchester club, scoring only one goal.

Drogba has been voted Chelsea’s best-ever player by the fans, which speaks volumes of the impact he made at the London outfit.

Capable of the spectacular at any given moment, Drogba scored 136 goals in 381 appearances for the Blues and provided many a captivating displays in the famous blue shirt.

He is a bona fide Chelsea legend and was the key figure in 2012 as the Pensioners became the first London club to win the Champions League.

Eto’o arrived at Stamford Bridge in the twilight of his career but still showed glimpses of his ability in his 12 months at the club.

Having played for Jose Mourinho at Inter Milan, he joined the Portuguese manager at the London-based side in 2013.

He managed a memorable hat-trick in a 3-1 win over Manchester United, one of his better performances for the Blues.

The legendary forward retired after a spell with Qatar SC.