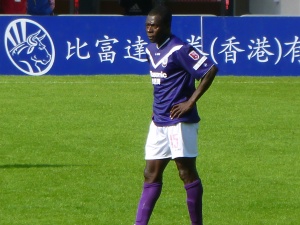 Mensah who is 40-years has signed a one-year deal with the side ahead of the start of their domestic season.

The left back has rejoined his former club after his departure in the year 2013 with his debut  goal for Citizen against Hong Kong FC in a 3-1 win.

Mensah, has previously played for so many Club in Hong Kong such clubs include Rangers,YFCMD and South China.