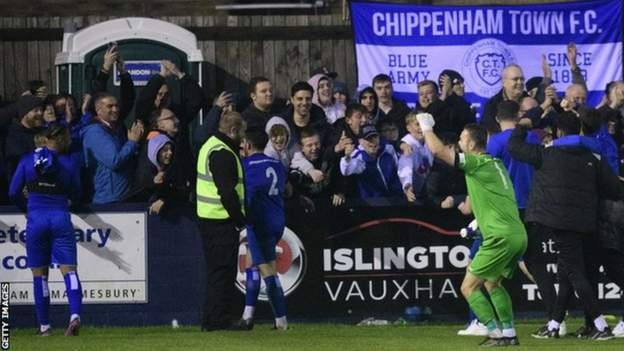 Chippenham Town manager Gary Horgan says he wants the club to "dream" and get themselves "in the hat with the big guns" for the FA Cup third round.

The Bluebirds are in the second round for the first time in their history after beating League One Lincoln City.

Horgan's men are now aiming for another upset when they face League One strugglers Burton Albion on Sunday.

"If you're 90 minutes away from a Manchester United, why wouldn't you want to embrace that," he said.

National League South side Chippenham caused one of the shocks of the first round when they beat Lincoln, thanks to former Cheltenham Town midfielder Joe Hanks' goal just before half-time.

They are 71 places below Burton on the league ladder but the Brewers are 22nd in League One and have conceded nine times in their past three league games.

"We're ready to go on Sunday. They're a League One side so they're going to be very good in terms of their patterns of play and we expect them to bring more physicality than Lincoln did," Horgan said.

"They will bring more threat if they do go direct so we'll need to handle that. They'll bring a good side who will not want to be humbled on their own patch.

"We've shown that we can compete and make it difficult for teams at that level. They'll bring a different set of tests for us but we go into it full of confidence," he added.

The game will be the first-ever meeting between Burton Albion and Chippenham Town in the FA Cup proper and the supporters are looking to make the most of the occasion.

Six coaches and about 650 fans are expected to make the trip to Staffordshire to see if their side can make it into the third round for the first time in the club's history.

"I'm sure they'll make their noise heard. It's been brilliant and I hope it's an occasion for the group, the team, the fans, and for the town as well.

"Hopefully we can give them something to cheer about or at least something to be proud of and make them want to come back again and again," Horgan said.

The Bluebirds are likely to be without their first-round hero Hanks, along with Aaron Simpson, who are both struggling with injury.

Horgan said these are the days that non-league footballers look forward to at the start of a new campaign and he wants his charges to embrace the day.

"We want to dream and go that one stage further and get ourselves in the hat with the big guns.

"As a non-league footballer this is what you sign-up for at the start of the season.

"You want to do well in the league and have a good run in the FA Cup and if you get a good draw then that can be the pinnacle because you don't get loads of opportunities," he added.