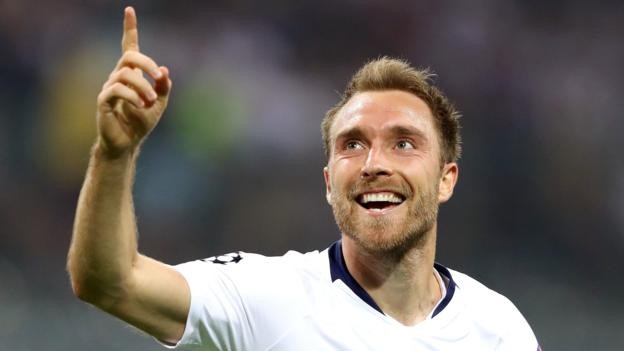 If Tottenham are offered anything less than £50m for Christian Eriksen this month, then they should keep him - even if it means he leaves for nothing next summer.

Eriksen's importance to the team was quite clear even just in Saturday's win against Aston Villa, when he came on in the last half an hour with Spurs 1-0 down.

I know Dele Alli was injured and Son Heung-min was suspended, but they needed Eriksen to get back into that game and for me he gives them something different to every other player in Tottenham's squad.

Tottenham managed only 12 shots at goal on Saturday before Eriksen came off the bench in the 64th minute with Aston Villa leading 1-0. They ended up having 31 shots in total as they fought back to win 3-1. Eriksen did not score or make any assists but made three key passes - playing the ball that led to a shot which did not end in a goal

I think Spurs have had a very good summer transfer window in terms of the players they have brought in, but it would change my outlook on the strength of their squad if they lose Eriksen - and certain other players - now.

The whole reason their Premier League form fell away in the second part of last season was their lack of depth. They have tried to rectify that, so letting a really key man like him go now does not make any sense to me, and any fee would have to reflect how big a blow it would be to lose him.

At the halfway stage of last season, Spurs moved into second place after hammering Bournemouth 5-0 at Wembley on Boxing Day. They had lost four league games, and were a point above Manchester City

But by the end of the season, Spurs had lost a total of 13 times and ended up 17 points behind champions City

I hope Eriksen stays, because he is so valuable to their chances of winning a trophy under Mauricio Pochettino.

Spurs might see last week's loan signing Giovani lo Celso as a direct replacement for Eriksen, so they are ready if the right bid comes in, but they will be much stronger if he stays.

Lo Celso is a very talented player, who creates and scores goals, but it is asking a lot for him to come to the Premier League and immediately be at Eriksen's level in terms of goals, assists and creative play.

Since he joined Spurs in 2013, Christian Eriksen has created 550 Premier League chances, more than any other player in that time. Arsenal's Mesut Ozil is second on the list with 521, followed by Eden Hazard with 520 for Chelsea, Manchester City's David Silva with 456 and Willian with 387, also for Chelsea

I still think Tottenham will make the top four if Eriksen leaves - they are better than Manchester United, Chelsea and Arsenal at the moment - but they have worked hard to get their squad into this position, and the idea is to build themselves up, so why allow themselves to become weaker?

What does Eriksen want to do?

That's the football side of Eriksen's situation but of course the financial aspect is important to Spurs too - they have got a new stadium to pay for.

But he only has one year left on his contract and Spurs are not going to get the true market value for him.

Christian Eriksen - season by season in the Premier League (and rank)

If they do get £50m, they will have done wonders - but any offers they get before the end of this month, when the transfer window closes in the rest of Europe, are likely to be a lot less than that.

In terms of the difference it could make to Tottenham's season, there are other players who I would be more willing to off-load to off-set some of the money they could lose out on by keeping Eriksen - Erik Lamela and Georges-Kevin Nkoudou for example.

Christian Eriksen has made 60 Premier League assists since joining Spurs in 2013, more than any other player in the same period. Manchester City's David Silva and Arsenal's Mesut Ozil are joint second with 52, followed by another City player, Kevin de Bruyne (46) and former Chelsea star Eden Hazard (43)

Part of it comes down to what the player himself is thinking, of course.

Eriksen is 27 and said earlier this summer that he is at the stage of his career where he "might want to try something new", and Real Madrid are reportedly interested in him.

But he also spoke about the possibility of signing a new Spurs contract and of course he could always let his existing deal run down, knowing next year he can go for free.

That is a win-win situation for him, because there would be no issues over which club meets Tottenham's asking price. They can get him for free, and his wages will reflect that, so I don't think he would sulk if he does end up staying with Spurs for another year.

Buying-wise, I was pleased with Tottenham's summer transfer window despite them failing to get the Paulo Dybala deal over the line.

When I heard they had agreed a £64m fee with Juventus for the Argentina international, I started to get excited.

It was a shame the move fell through, because Dybala could have helped to bridge the gap from Spurs finishing comfortably in the top four to getting a lot closer to Liverpool and Manchester City in the title race - assuming they kept hold of Eriksen too.

But the thing Spurs fans should be getting excited about is that a bid was made - along with a big offer for Bruno Fernandes at Sporting, by all accounts.

I don't think the intention was to buy both of them, but they certainly wanted to land one of them. It shows the mindset of the club that they gave it a go, and it is exactly the approach that fans have been craving.

It makes me think that, come January, they can go again, or target that really big signing next summer in the way Manchester City and Liverpool have done in the past.

Two years ago, Tottenham defender Danny Rose questioned the club's transfer policy, when he called on them to bring in big names and not players "you have to google".

Well, here they are. And more of the same is on the horizon as far as I'm concerned.

Is Spurs defence the strength it was?

A lot of my optimism does depend on players staying, though. Eriksen is the big one but there have been doubts over whether centre-halves Jan Vertonghen and Toby Alderweireld could leave this summer - and, until recently, about Rose's future too.

Despite the signings that have been made, I do feel full-backs are still an issue, on both sides.

I am not sure Ryan Sessegnon is going to turn out to be left-back, but Spurs already have Ben Davies, who is decent, and Rose too. If they can get Rose focused, then he is still one of the best left-backs in Europe.

I am more worried about the right-back position after losing Kieran Trippier to Atletico Madrid because Pochettino does not seem to have much faith in Kyle Walker-Peters and things have not worked out for Serge Aurier.

It looks like Juan Foyth is going to be Pochettino's man to fill the gap, but we will have to wait a little longer to find out because he has been sidelined by an ankle injury.

It already feels like defence is not the strength it was for Tottenham a couple of years ago - they lost 13 Premier League games last season, which is a concern.

Then you have the situation with Vertonghen being left out of the squad completely on Saturday, which was very strange. Reading between the lines, it would not surprise me if he left in the next couple of weeks.

Even if Vertonghen stays for now, he and Alderweireld are both into the final year of their contracts, and both over 30. They have been mainstays of the club for several seasons now but there is a chance neither of them will still be there this time next year.

So, this is a process that doesn't stop and, come January, Spurs need to have a plan.

Otherwise they could be in a position where they need to make several signings in the same area of the team in the next summer window, which is exactly the scenario they want to avoid.