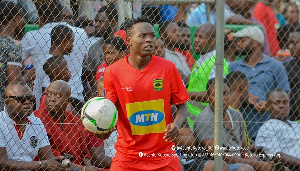 Asante Kotoko defender, Christopher Nettey has rendered an apology to Ghanaians on behalf of Ghanaian boxer Patrick Allotey who is currently in hot waters with the law after assaulting a fan in the Super Clash.

Allotey assaulted Michael Siaw a Kotoko fan during the game between Hearts of Oak and Asante Kotoko at the Accra Sports Stadium on matchday six.

Christopher Nettey who happens to go way back with Patrick Allotey stated in an interview that the boxer came to the Accra Sports Stadium to show some support to him and his team.

He pleaded with Ghanaians on the behalf of his friend for the assault which has triggered his suspension by the Ghana Boxing Authority (GBA) and  has been granted a bail of GHC 100,000 by the law court and his passport was confiscated.

“It is because of me that Patrick Allotey came to the stadium to watch the game", he told Happy FM.

“I will apologise to anybody who was affected in this incident”.