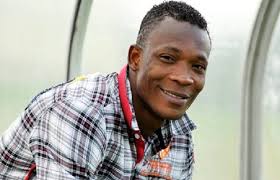 John Paintsil, a former Ghana defender, has charged Black Stars Charles Kwabla Akonnor and his backroom staff to be disciplined in order to succeed as Black Stars coach.

Akonnor has been appointed on a two-year deal as the new head coach of the Black Stars.

According to him, the former Kotoko trainer will only succeed as head coach of the Black Stars when he has the support of his backroom thus he must ensure there is mutual respect among the technical members.

Speaking in an interview with Happy FM he said, “CK Akonnor must ensure discipline to have control of the Black Stars.

“CK must monitor his backroom to support him. If he is not disciplined he is going to have problems with the players. He should know how to program his training and ensure his backroom maintain disciplined in the team”.

Paintsil said he expects CK Akonnor to be disciplined as well as his backroom staff.

“I am expecting him to pay key interest in that because it brings confusion into the team when they don’t maintain discipline in the team”, he noted.

Paintsil also indicated that CK Akonnor will get respect from the players if he carries himself well.

“CK Akonnor must position himself to get the respect he needs. He must be firm in his decisions and set a good tone for the players to follow”.