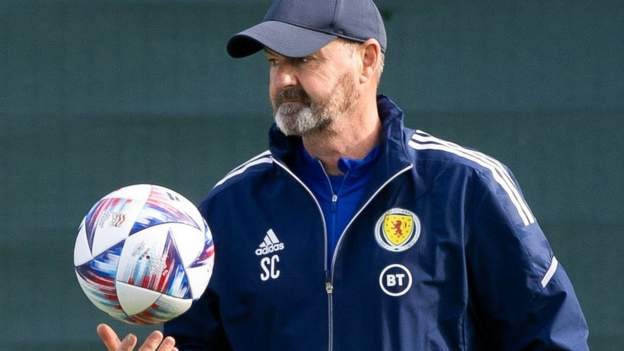 Steve Clarke insists his Scotland side "never set up for the draw" as they approach Saturday's Nations League meeting with Republic of Ireland.

Scotland moved top of Group B1 with Wednesday's impressive 3-0 win against Ukraine in Glasgow.

After the Hampden date with the Irish, the Scots take on Ukraine in Poland in Tuesday's final fixture and two draws would secure promotion.

"You always have to go with a winning mentality," said Clarke.

"We want to feel good about ourselves going into every single game. You never set up for the draw, you always set up to win and if you're not quite good enough to win then hopefully you get the draw.

"At the moment, all we've achieved is we can't get relegated from the group.

"We can finish second, we can finish third. We've still got everything in front of us. You could get carried away looking at what we could achieve but let's just concentrate on the next game and make that next step forward."

'Why not aim for 100?' - McGinn's Scotland dreamDoig & Gallagher added to Scotland squad

Top spot in the group would also result in a pot two seeding for next month's Euro 2024 qualifying draw and guarantee the safety net of a play-off path to the tournament.

Ukraine, two points behind Scotland, will have played Armenia in Yerevan before kick-off at Hampden on Saturday.

Scotland, who switched to a back four on Wednesday instead of deploying three central defenders, are also out to avenge June's 3-0 defeat in Dublin, which came 10 days after a painful World Cup play-off semi-final loss to Ukraine.

"It was a difficult summer for us," Clarke explained. "This time we have to make sure that we reach our level. If we can reach our level then let's see what the result is.

"We need to combat their strengths and make sure we play to our maximum and show our qualities. We showed an improved performance against Ukraine from what we did in the summer and the idea is to replicate that again.

"The four at the back just felt the right way to go. It worked well but maybe in games going forward the back three is the way to go. I've always said I want to be flexible."

John McGinn is expected to win his 50th cap and captain the side again in Andy Robertson's absence.

Lyndon Dykes scored twice off the bench against Ukraine, having replaced Che Adams.

"You want to be challenged all the time on positions by players," said Clarke.

"I don't think Lyndon was very happy with me that he didn't start. That's what you want. Come off the bench and show what you can do and then give me an even bigger decision to make in the next game. I want that all across the pitch, every position."