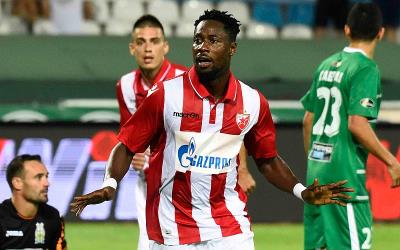 Red Star Belgrade striker Richmond Boakye Yiadom will make a return to action this weekend and on Tuesday for the return group stage match against Tottenham Hotspurs in the Uefa Champions League.

The Ghanaian International failed to make the trip to London last week when he suffered a mild injury during a training session ahead of the first encounter.

He has since been on the treatment table and missed Red Star Belgrade’s 5-0 victory over Radnik Surdulica in the Serbian Super Liga.

Boakye has confirmed he fit now and has been training in the last three days.

"I have been training in the last three days and I’m very confident of playing this weekend and also making the Squad for the Champions League game against Spurs on Tuesday", he said.

The 26-year-old will be hoping to make amends for their 5-0 embarrassing defeat in the first leg against Tottenham.

Boakye Yiadom scored in his last home game against Olympiacos in the Champion League and is rearing to play a significant role in his club’s quest overtake Tottenham in second position in Group B.