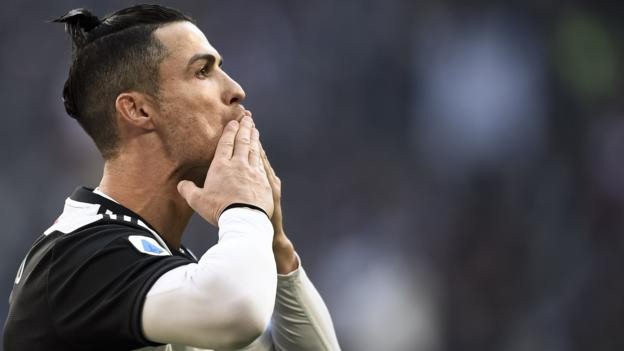 Cristiano Ronaldo is no stranger to a record.

He's scored against more international teams than anyone else (41), has the most Champions League goals and is the only player to score 50 or more goals in six seasons. You name a record and, if his great rival Lionel Messi doesn't hold it, the Juventus striker probably does.

He is on the cusp of equalling another too.

If he scores on Sunday in Juventus' home game against Brescia, he will have scored in 11 consecutive Serie A games - equalling the record for goalscoring run in one season set by former Fiorentina forward Gabriel Batistuta in the 1993-94 season and matched by Sampdoria's Fabio Quagliarella last year.

The Portugal international has scored in his past 10 league games for Juve, a new record for the Old Lady, beating David Trezeguet's mark from 2005.

Ronaldo's run started when he converted a penalty against Sassuolo on 1 December. In his 10-game goal sequence, the 35-year-old has scored 15 times, including five penalties.

If he does equal the record this weekend, he will have the chance to break it away at SPAL on 22 February. Given that Brescia and SPAL are the bottom two sides in Serie A, it would take a brave person to bet against the former Manchester United forward adding another record to his CV.

Ronaldo could also set a few more new marks in the months to come - we have done some digging and found these records that the forward could break.

He could become the highest men's international goalscorer - he already holds the European record with 99 goals, leaving him 10 behind Iran's Ali Daei who scored 109 between 1993 and 2006. With the Euros and warm-up games before hand, the record is well within sight for Ronaldo. The is also the target of becoming the European Championships all-time top goalscorer - he is currently level with France's Michel Platini with nine goals in the competition. It is a record Ronaldo will expect to hold come June - although, with France and Germany the two confirmed teams in Portugal's group so far, it will not be plain sailing. If Juventus win the Champions League, he will equal Francisco Gento's record of six European Cups. Ronaldo and Messi currently share the record for Champions League hat-tricks with eight each. Will Ronaldo pull ahead? If he wins the Golden Boot in Italy, he will become the first player to win the award in three countries. He has currently scored 20 in the league, five fewer than Lazio's Ciro Immobile. Ronaldo is chasing the record for most goals for Juventus in a season - he currently has 24 goals in all competitions this season, leaving him 12 behind Ferenc Hirzer who scored 35 times in the 1925-26 season.

If he achieves a few of the above, there is a good chance he may also pull level with Messi on six Ballon d'Or trophies...