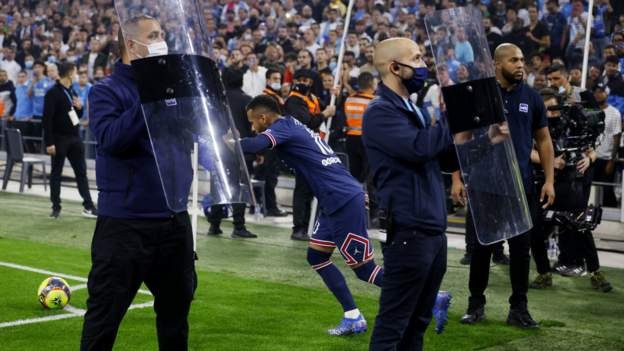 Marseille and Paris St-Germain played out an eventful draw with several big VAR decisions as play was held up several times for crowd trouble.

In both halves play had to be stopped as home fans threw bottles at Neymar as he tried to take a corner.

On both occasions security staff used plastic shields to block the missiles while the corner was taken.

A pitch invader ran onto the pitch and put his hands on Lionel Messi's back in the second half.

Both sides had goals ruled out by the video assistant referee (VAR) - and PSG had Achraf Hakimi sent off for a professional foul on Cengiz Under.

While the referee consulted with the VAR team on that red card decision a laser shone into his face.

A Luan Peres own goal from Neymar's cross and Arkadiusz Milik's strike for Marseille in the first half were both ruled out by the VAR for offside.

Messi, who is yet to score in Ligue 1, headed off the bar - leading to the first Neymar corner - and Konrad de la Fuente missed a big chance for Marseille towards the end.

PSG, unbeaten in 11 league games this season, are seven points clear of Lens at the top.

Attempt missed. William Saliba (Marseille) header from the right side of the box is too high. Assisted by Dimitri Payet with a cross following a corner.

Danilo Pereira (Paris Saint Germain) wins a free kick in the defensive half.

Attempt missed. Pape Gueye (Marseille) left footed shot from outside the box misses to the left. Assisted by Gerson.

Attempt saved. Mattéo Guendouzi (Marseille) right footed shot from outside the box is saved in the bottom right corner. Assisted by Pape Gueye.

Dimitri Payet (Marseille) wins a free kick in the attacking half.

'That day was going to be a bad day': Exclusive footage and interviews from January's storming of the US capitolRidley Road: Caught between life and death in the swinging sixties