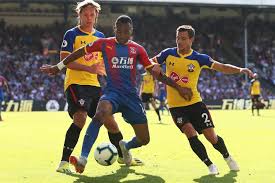 Crystal Palace chairman Steve Parish has back Jordan Ayew to take his chances and start scoring goals in the absence of injured Christian Benteke.

The Belgium striker is currently out with a knee injury and will be undergoing minor surgery earlier this week to try and solve the troublesome problem.

Eagles manager Roy Hodgson earlier this week confirmed that he expects the 27-year-old former Liverpool hitman to be out until the new year.

However, according to  Parish, he expects Ayew to grab such a golden opportunity and carry the club on his chest and start finding the back of the net while he hopes Benteke will come back sooner.

The former Aston Villa talisman is yet to score a goal for Palace after five Premier League appearances this season.

“You will get them [injuries], and other people have got to take their chance,” he said.

“Christian [Benteke] will come back, and hopefully he might come back sooner, and we are hopeful that with a fair wind we might get him back before January.

“These things aren’t always an exact science, timing wise, so we are hopeful that we may get him back sooner, and of course we have Connor [Wickham], who came back against Dulwich, and Alex [Sorloth] and Jordan [Ayew], so we have got other players who have got to step up and take their chance.”