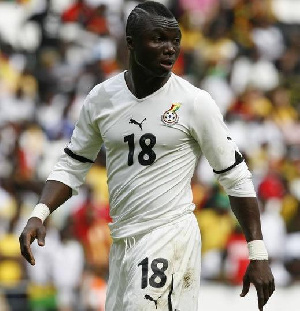 Former Hearts of Oak defender Dan Quaye believes Dominic Adiyiah was unable to reach full potentials due to the treatment meted out to him by Ghana FA and technical handlers of the national team.

Adiyiah became a household name in the country following his swashbuckling performance with the Black Satellite team.

He played a key role as the U-20 team made history to become the only African team to win the World Cup in 2009.

The former Hearts of Lions striker outstanding performance with the Ghana youth team earned himself a place in the Black Stars team that reached the quarterfinals of the 2010 World Cup.

Adiyiah was tipped to become a top striker in the world but his career took a nosedive and is nowhere to found in any of the top-flight leagues.

He was unable to maintain his place in the national team and according Dan Quaye, the Ghana FA and the technical handlers are the cause of his downfall.

Speaking to Koforidua-based Aben FM, Dan Quaye said, “We don’t treat our players well. Now, the country is struggling to find Asamoah Gyan’s replacement. If we had taken good care of our players, by now Dominic Adiyiah could have step up and bag the goals for the Black Stars”

“If I may ask, where is Adiyiah now? We are the cause of his downfall” he said.

“Andre Ayew is a good player but I can tell you the U-20 team groomed by Sellas Tetteh was a complete team even before he was invited. Ayew was made the captain just to give him a big market because he was playing for Marseille at the time and at the tournament he didn’t disappoint” he said.