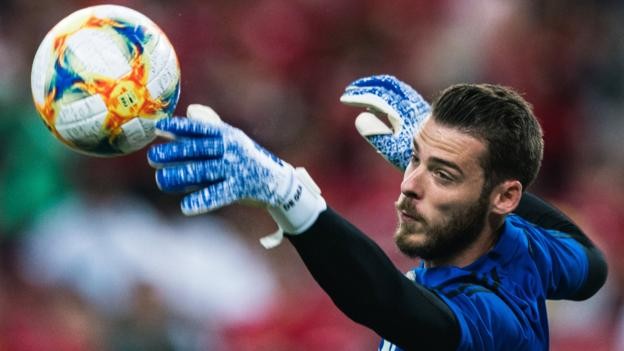 Ole Gunnar Solskjaer is confident it will be resolved - and Manchester United are calm - but the point at which David de Gea is free to commit his future elsewhere is drawing closer.

The failure to announce a new contract for the Spanish goalkeeper, with whom United have been negotiating for more than two years, is creating unease among the club's support.

There have been a few twists in the tale of De Gea's future over those two years. It appeared at one stage that he was committed to stay; at another, it seemed he had resolved to leave.

Yet in July, after United made their latest offer, the feeling from both the club and the player's camp was one of confidence. There was a strong belief that negotiations would be concluded after the pre-season tour of Australia and Asia.

Seven weeks after United returned to Manchester, there is still no official confirmation of a deal being signed. On 1 January, De Gea - signed from Atletico Madrid for £18.9m in 2011 - will be free to sign pre-contract terms with any club outside England.

"I am pretty confident we will get this sorted," said Solskjaer.

"David has never, ever said to me anything other than he loves the club, has had a fantastic time and wants to stay. So let's just hope we get it over the line."

'One of the few world-class players available to Solskjaer'

Kepa Arrizabalaga has seven caps for Spain, while De Gea has 40

De Gea's value to Manchester United can be measured by his individual awards. The goalkeeper won the Sir Matt Busby Player of the Year award four times in five seasons between 2014 and 2018.

He may have lost his place in the Spain team to Chelsea's Kepa Arrizabalaga, but De Gea remains one of the few truly world-class players available to Solskjaer.

If the goalkeeper were to leave, any replacement would almost certainly represent a regression, even if Solskjaer feels he has adequate cover. At present, the manager has Argentina international Sergio Romero as second choice, Lee Grant as his third option, and the England Under-21 keeper Dean Henderson, who is out on loan.

"I have two very good back-up keepers here and Dean is at Sheffield United," Solskjaer said. "Overall, the goalkeeping department is in good health."

When De Gea arrived at Old Trafford, United had just won the Premier League and made a third Champions League final appearance in four seasons, losing to Barcelona at Wembley.

The slide since than has been significant.

After the failed tenures of David Moyes, Louis van Gaal and Jose Mourinho, Solskjaer has been brought in to reconnect the club to its glorious past.

Solskjaer says he still views United as "the biggest and best club in the world". Yet there is a clear gap between that view and the reality.

On Saturday, United host a Leicester side who are above them in the table. The visitors, under the management of Brendan Rodgers, do not have the distraction of a European campaign and appear well set to challenge for a top-four place.

United are already finding it much harder to attract star names in their prime than they did during Sir Alex Ferguson's time. The loss of De Gea - to Paris St-Germain, Juventus or any other similar-sized club - would be a further blow to their prestige.

For now, that is something Solskjaer is unwilling to contemplate.

Asked if keeping De Gea would be a statement, the Norwegian said: "Yes, definitely.

"We got used to having the best keepers here;: [Peter] Schmeichel, [Edwin] Van der Sar, De Gea. We want the best ones. We want to build a winning team again, to challenge for the biggest trophies."