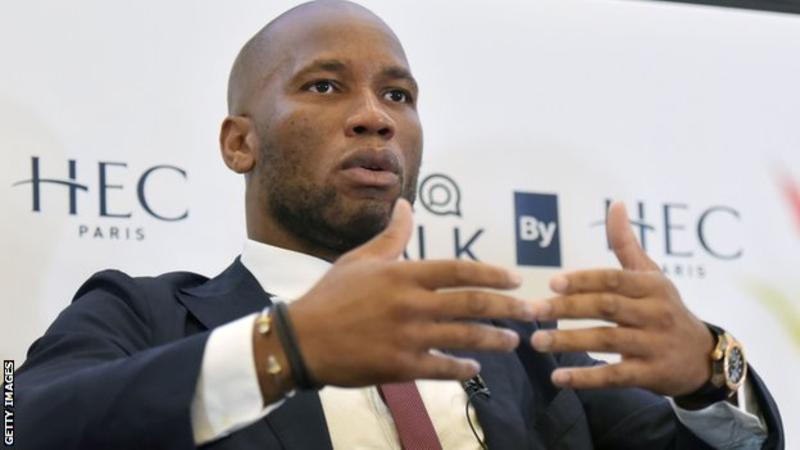 The body that oversees the third-tier of football in Ivory Coast has given its backing to Didier Drogba's bid to become the next president of the Ivory Coast Football Federation (FIF).

The Chelsea and Ivory Coast legend, 41, announced his intention to run in September as he seeks to restore the image of the country's game.

Drogba met with more than 20 presidents and representatives of the lower tier clubs on Wednesday in Abidjan to share his plans and bid to replace the incumbent Augustin Sidy Diallo, whose tenure runs out next month.

The official deadline for candidates to submit their applications to be considered for eligibility is also next month.

"Didier Drogba presented his program with a lot of maturity and humility that I must confess is very attractive and promising," Anzouan Kouakou, president of Séraphin FC, told local media after Wednesday's meeting.

"I think it would be very interesting for us to have a leader like him as federation president because he surprised us by his maturity in the management of football.

"Today he is an icon whose image attracts tourism but can also restore the image of Ivorian football."

Antoine Gnapo, president of Gbalet Sport of Buyo, in southwestern Ivory Coast, admits that after presenting his program, the club presidents raised concerns, asked questions and made "relevant proposals".

The former captain of the Elephants has also met with presidents of the division two clubs and plans to meet with those from the top tier as soon as possible.

However, not everyone shares the clubs' confidence in Drogba, a former international who won the African Player of the Year honour twice.

Questions have been raised about his lack of experience, with 1992 Nations Cup winner Oumar Ben Salah suggesting Drogba still needs to learn the ropes before contesting for the top post.

"I don't want him to interpret my words wrongly. But I've been wondering for days if Didier [Drogba] has thought it through properly," said Ben Salah.

"He has a big name. He wore the national shirt even though he didn't win the Nations Cup. He has proven his talent in clubs too, but FIF is too early for Drogba.

"Let him gather experience first because that is his weakness. He played at the high level, but it's not enough to want to come to lead FIF."

Ivorian football has been struggling since winning the 2015 African Nations Cup.

As defending champions, the Elephants suffered a humiliating group-stage exit from the 2017 tournament and reached the quarter-finals in Egypt this year.

In the absence of Drogba and brothers, Kolo and Yaya Toure - the West African nation failed to qualify for the 2018 World Cup, having participated in the previous three editions in 2006, 2010 and 2014.