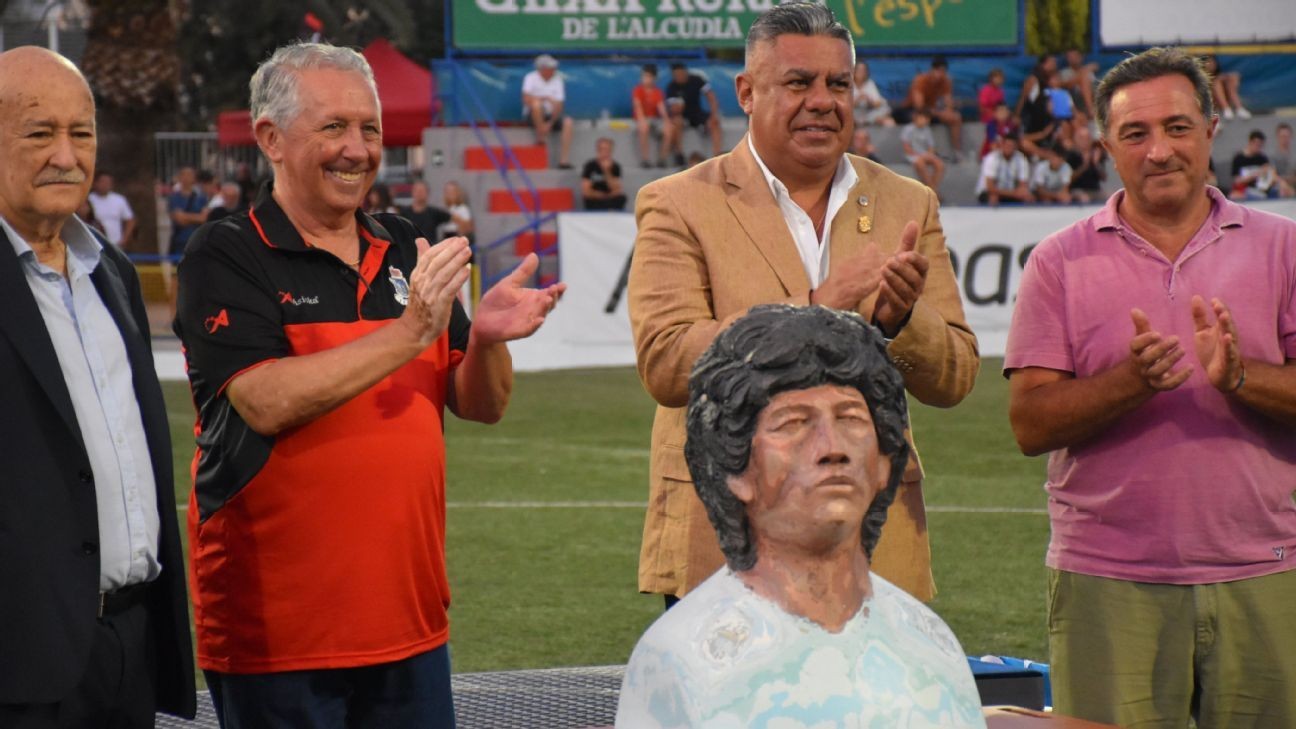 As one of the most iconic footballers of all time, it stands to reason that Diego Maradona has had his likeness captured in statue form more than most.

Unfortunately, the resemblance is not always particularly favourable, and Maradona has suffered his fair share of bad busts and shoddy sculptures over the years,

Indeed, the latest entry to the grand pantheon came when a tribute to the late, great World Cup-winning legend was unveiled during the COTIF Under-20 international tournament being held in L'Alcudia, a small town in the province of Valencia, Spain.

As part of a wider tribute to Maradona, the statuette was proudly revealed by Argentina Football Association president Claudio Tapia.

The figure was designed and created by local Spanish artist Rafael Ferri, and was unveiled at the Els Arcs stadium before the COTIF final, which eventually saw Argentina's under-20 side beat Valencia's academy team 2-0 to lift the trophy.

Given the dubious similarities between El Diego and Ferri's lumpy artwork, social media was quick to have its fun as fans mocked the statue by likening it instead to Sylvester Stallone, Bruce Lee and even the infamous botched restoration of the portrait of Jesus (Ecce Homo) by an 80-year-old amateur artist in Borja, Spain, back in 2012.

Let's not forget this 12-foot tall masterpiece in Kolkata, India, which appeared to have accidentally used a photograph of Bobby Ewing from "Dallas" as the reference, rather than Maradona.

Football icon, Diego Maradona, has been honoured by a statue with a bronze sculpture that was unveiled at a club in #Kolkata. The statue features the 1986 World Cup winner with the trophy he helped Argentina win in Mexico. The @SGanguly99 vs Diego match is happening today. pic.twitter.com/eB2SWrQARJ

Again, no images of Maradona appeared to have been used as source material for this utterly generic golden figure in situ at Ezeiza International Airport in Buenos Aires.

There is now a Diego Maradona statue at Ezeiza International Airport in Buenos Aires, Argentina. pic.twitter.com/wx5XZpXd5K

Maradona, of course, isn't the only star player to have been crafted into something very different from their actual appearance. Some of the world's biggest stars have also suffered the same fate.

Let's start with Cristiano Ronaldo, who had the misfortune of being the subject of one of football's all-time strangest artistic homages back in 2017.

Man City recently unfurled a glitzy statue of Sergio Aguero following his emotional departure from the club, depicting the striker's famous title-clinching heroics on the final day of the 2011-12 season.

Unfortunately, due to a combination of the glittering blue material used and the tenuous likeness to Aguero, it looked like City had placed a giant tribute to Captain Planet on the concourse outside the Etihad.

Fellow City hero David Silva also received a similar statue outside the stadium to mark his 10-year run at the club, but it paled in comparison to the odd, hunched, slightly withered bronze already on show in his hometown of Las Palmas.

David Silva's statue in his home town is going straight into the Slightly Odd Footballing Statues Hall of Fame: pic.twitter.com/4jqHSJHup6

Located outside an office supply store on an unassuming street corner in the Uruguayan city of Salto, this dumpy statue of hometown boy Luis Suarez is made all the more amusing by the fact that it's slightly smaller than lifesize.

And last on this list of statue faux pas, Mohamed Salah.

A new statue of Mohamed Salah is causing a storm on social media: https://t.co/ikiWZrWSLC pic.twitter.com/VKhS9fbYdv