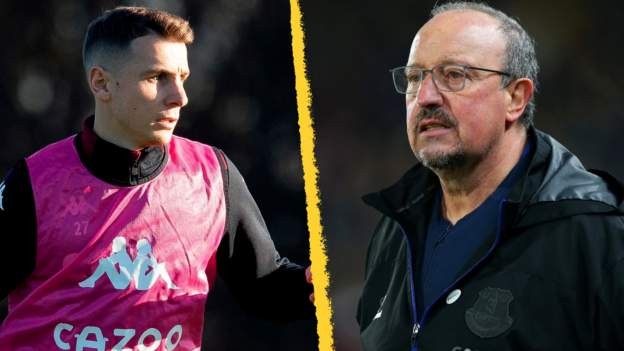 Digne trained with Aston Villa after joining the club on Thursday

Everton boss Rafael Benitez has insisted that Lucas Digne's departure is "good business" for the club.

The French left-back joined Aston Villa in a deal worth up to £25m after falling out of favour under Benitez at Goodison Park.

Benitez says it is "positive" to replace a player that will turn 29 this year with young players.

"I am the manager and I take the responsibilities of my decisions," said the Spaniard, 61.

"It is to think of the team and the future of the club. We have to move forward and think about that."

Digne, who signed a four-and-a-half-year deal at Villa Park, said he did not expect his time at Everton "to end this way" and added that "sometimes it only takes one person from outside to destroy a beautiful love affair" in an Instagram postexternal-link.

"If you're in a boat and someone is not rowing with the strength that you are expecting then you have to make your decision," added Benitez, who has signed two full-backs this month in Rangers right-back Nathan Patterson and left-back Vitaliy Mykolenko from Dynamo Kyiv.

"The realities are when you have a player that is thinking to leave and then you have an offer, a possibility.

"We brought in a couple of good young players, hungry players. I'm sure they will be good now and better in the future.

"It's something positive for the club to sell a player who will be 29 years of age this year and bring in players of 20/22 and in positions we needed to balance.

"We are balancing the squad, improving the competition, and economically it is good business."

Everton also brought in Dutch winger Anwar El Ghazi on loan from Villa and Benitez said the 26-year-old was "part of the deal with Digne when we started the conversations".

"We were thinking about the Covid situation, possible injuries, the Africa Cup of Nations with (Alex) Iwobi away and bringing in someone with quality who could give us different options," explained Benitez ahead of Saturday's Premier League trip to Norwich City.

"It is good because it is a loan with an option and the player has to prove himself.

"We can see him, so I think it's a win-win situation. If he's doing well everyone will be happy and he has told me he has come to fight and show his level."

Benitez confirmed he has had everyone back in training except midfielder Tom Davies, who he expects to be out for "one to two months".