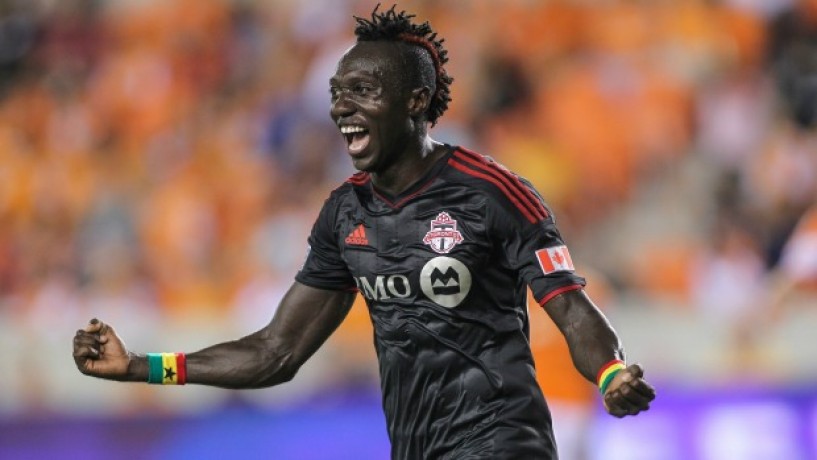 On the last day of the MLS secondary transfer window, the San Jose Earthquakes made a like-for-like trade with the Montreal Impact, acquiring veteran forward Dominic Oduro in exchange for Quincy Amarikwa. Oduro, who began his career in 2006 with FC Dallas, is joining his eighth MLS team in San Jose, the most of any player in league history.

The pacy forward has scored 63 goals in his 13 seasons, the ninth most among active MLS players, but he has not found the back of the net yet this campaign. After making only five substitute appearances for the Impact in 2018, Oduro is hoping a change of scenario will help revitalize both himself and the Earthquakes.

“I’m happy to be here and look forward to helping the team right now win games,” Oduro told Pro Soccer USA. “I want to make the supporters happy, to help them get the enthusiasm to come back and watch games again.”

After three successful seasons in Montreal, in which the forward scored 15 goals and added 6 assists, he was relegated to the bench when new head coach Remi Garde took charge. It was a tough situation for the normally gregarious Oduro, and so a move seemed inevitable. His trade to the Quakes marks the fourth time in his career that he has changed teams midseason.

“Montreal was probably one of the most stressful periods I’ve been in during my professional life,” Oduro said. “The coach and I were not on the same page, so it was tough for me to get playing time. Everyone tried to find a way for us to be happy, but it was too late. It is what it is, that’s how the league is.”

Oduro moves from a side fighting for a playoffs spot to one that is rooted to the bottom of the standings, but that does not dampen his enthusiasm at the opportunity to get on the field again. His most productive seasons came earlier this decade — he scored double-digit goals for Chicago Fire in 2011 and for the Columbus Crew two years later — but he still says he has plenty to offer the Quakes in the moment and perhaps beyond.

“I bring a little bit of excitement,” Oduro said. “We need to push ourselves and start winning games, and we can start talking about next season, obviously.”

With three games in eight games coming up on the calendar, all at Avaya Stadium, head coach Mikael Stahre indicated that there will be some squad rotation, and Oduro, who brings some much needed speed to the attack, is likely to see the field at some point during the homestand.

“Yes,” Stahre told Pro Soccer USA. “He’s a really athletic player. He can help us in that sense that we lack that quality, so we see him first of all has a winger. He looks quite sharp in his first week here, and he can help the team definitely.”

For his part, Oduro is looking forward to the opportunity to step on the field again, possibly as early as this Saturday against defending MLS champions Toronto FC, a team he has battled against numerous times, both in the league and in the Canadian Championships, when with the Impact. Most of all, Oduro is hoping to bring out some of his trademark joy for the game.

“I bring a little bit of passion, a little bit of pizza eating — you know I love pizza,” Oduro laughed. “Right now, I want to encourage fans to watch games and have fun. I know it is tough mentally for fans to come out and see where we stand, so we want to change that.”

Oduro is synonymous with pizza, having famously celebrated a goal while a member of the Crew by racing to the endline, grabbing a piping hot box of the delicacy, and eating a slice of pie as his teammates rushed to join him. Oduro, who turned 33 earlier this week, enjoyed his first pizza in San Jose — a heart-shaped pie loaded with his favorite toppings — delivered to him on the field at Avaya Stadium.

“Yes, I had my first pizza here on my birthday,” Oduro said, adding that he hopes to enjoy many more. “I put out the call to fans to tweet at me some of the great places to have pizza, so hopefully that happens soon.”

Oduro has always been open to fans, especially on social media at his Twitter handle @Freakyfast8, and he is not only asking the Quakes community for pizzeria recommendations. Known also for his creative hairstyles, he also anticipates sporting a new look to honor his move to San Jose. It likely won’t be unveiled this weekend — there is still some preparation to do — but he is open to ideas on what it eventually will be.

“I have to grow it out first, as you can see it is a little bit rough right now,” Oduro said. “I need to find a good barber shop, so if any fans can recommend a good place for me to get my hair done, that would be awesome. I have to put out one or two hairstyles for the fans, so that is definitely coming through.”

With his infectious personality and his on-field talents, Oduro is ready to bring some fun, and hopefully some goals, to San Jose.