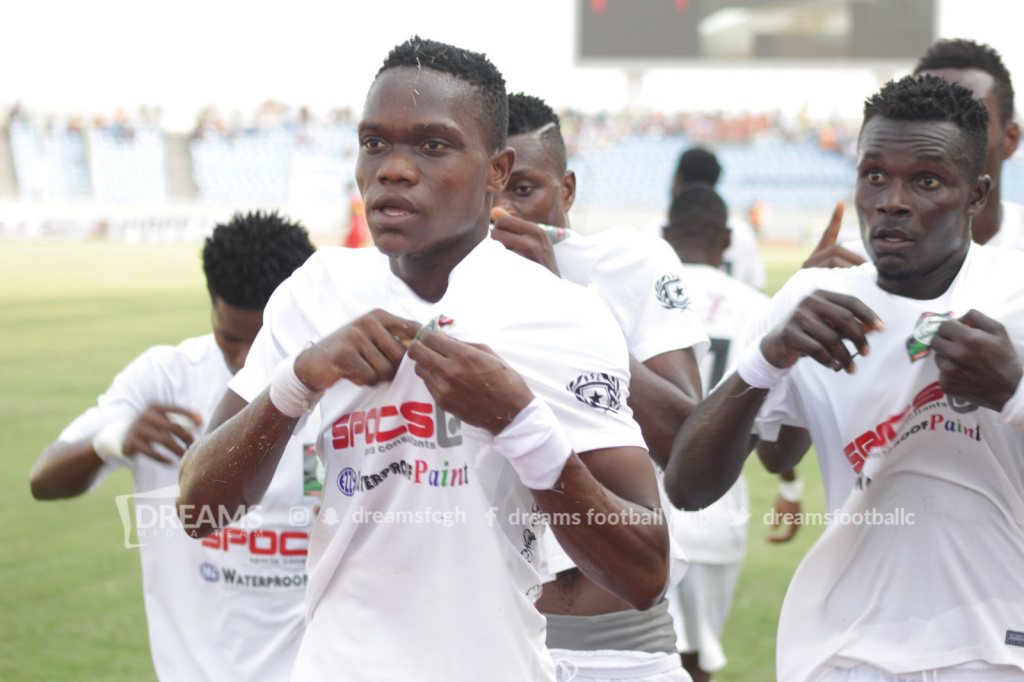 Dreams FC came from a goal down to beat giants Accra Hearts of Oak in the finals of the GHALCA G8 tournament played on Sunday at the Cape Coast Stadium.

In a charged sporting atmosphere with hyper levels of spectatoring, the Still Believe lads were not shy of their usual style and form showing signs of composure from the blast of the whistle.

Goalkeeper Isaac Amoako was however caught on the wrong foot as Daniel Kordie hit a volley in the 13 minutes to hand the Phobians the lead.

But Dreams would reply minutes 4 minutes later through Razak Cromwell who was well composed in the box, leaving Hearts goalie Ben Mensah with no chance for a save.

With the scores level, Hearts saw less of the ball as Dreams were completely invisible and unmatched in posession with Sharani blasting an effort against the upright to end 45 minutes of thrilling football action.

Not much changed in the opening minutes of the second half but goalkeeper Isaac Amoako made amends and showed his prowess making goal bound saves to keep his side in contention for a win.

But after holding the fort against the Phobians for a while, Dreams FC took centre stage one more time, totally dominating the opponent as Zuberu Saharani troubled Akrofi and Inusah Musah all afternoon.

Skipper Leonard Owusu had his moments in midfield, twisting and turning around markers as Iniesta and Patrick all featured in the inter positional play.

Striker Zuberu Sharani set up Eric Gawu in the 69th minute who’s pace outrun Ben Mensah for a penalty  as the experienced forward was tripped in the box.

Leonard Owusu “Jingles” stepped up to slot home the winner from the penalty spot, completing a well deserved comeback against the 20 time premier league champions.

Midfielder Kwadjo Asamoah had his share as the game worn out in the second half, coming on a substitute for Wiafe Iniesta.

Hearts were close to grabbing the equalizer moments from full time as Patrick Razak struck within the box but his effort deflected before being cleared out by Arthur.

It was the final kick as fans and sympathizers went ecstacy seeing the team earn it’s first major silver of the new year.