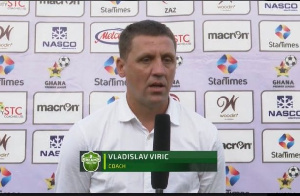 Head coach of Dreams FC Vladislav Viric has resigned from his post following the sides defeat to Berekum Chelsea on Sunday.

The Still Believe lads suffered a 1-0 defeat at the Theater of Dreams, Dawu in matchday 16 of the Ghana Premier League.

Kelvin Obeng’s strike for the Berekum-based outfit settled the encounter.

Speaking after the game, Vladislav Viric announced his resignation from the club after failing to live up to expectations.

“Chelsea came here to defend, one corner they scored and after that we tried something but we couldn’t and congratulations to them”

“I’m so sad because Dreams now stays in this position, before the start of the season we spoke about some better place. I as coach must take responsibility and so, I have resigned because I couldn’t help. I am also tired and I don’t have options anymore and I wish Dreams all the best” he said.

Dreams FC currently sits 11th position with 20 points after 16 matches into the season.