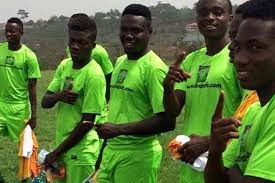 Ghana Premier League side Dreams FC will be playing glorious Accra Hearts of Oak in a titanic club friendly on Sunday, 17 February.

The local friendly is scheduled for Dawu, the Theatre of Dreams at exactly 3:30 pm local time.

Both teams were due to partaking in the Normalization Committee Special Competition slated to commence over the weekend. However, that won't happen due to the cancelLation of the competition.

But the game will serve as a test match for well branded Ghanaian topflight club, Dreams FC having faced the continental Masters for a long time. This will be the first encounter between both teams in 2019.

Dreams FC going into the game is determined to end highflying Accra Hearts of Oak, who in their eight games tested no defeat. But has recorded 10 straight wins in 13 matches.

Dreams are with the hope of ending the dominance of Accra Hearts of Oak come Sunday at the Theater of Dreams.