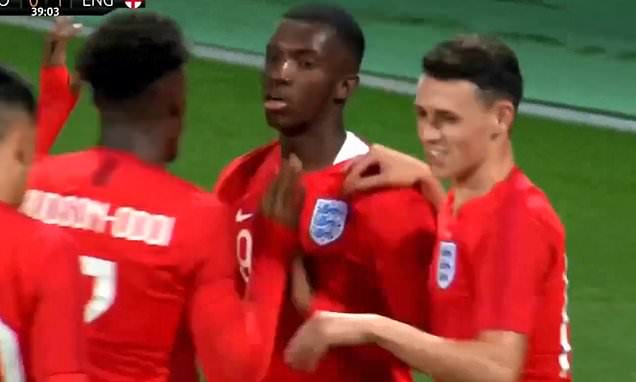 English-born Ghanaian forward, Eddie Nketiah enjoyed a good day at the office on Friday night by impressing and finding the back of the net for the England U-21 team in their 2-2 draw against the Slovenia U-21 team.

The two countries will be engaged in European Championship qualifiers in this international break and opted to play a warm-up game yesterday.

Following a good day’s work, both teams scored twice and managed to finish the match in good spirit.

Eddie Nketia opened the scoring for England on the 49th minute through a penalty kick to send his side into the break with the lead.

They resumed the break and continued from where they left off until they scored a second on the 71st minute courtesy a strike from Sam Surridge.

Now in the driving seat, they could not hold on and conceded two goals in the last 10 minutes. Strikes from Dejan Petrovic and Janez Pisek ensured Slovenia drew 2-2 with their opponent.

Eddie Nketia who is currently on loan at Championship side Leeds United impressed throughout his stay on the field and will be in action for the England U-21 team when they take on their counterpart from Austria on Tuesday, October 15, 2019.