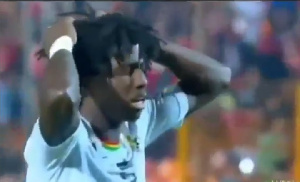 Ghana secured qualification to the tournament after emerging as group C leaders.

Ahead of the tournament, Sarpong who ply his trade for Portuguese lower-tier side Esperanca de Lagos is hoping to break into coach CK Akonnor’s squad for the much-anticipated tournament.

He told Angel TV that he will work hard in order earn call-up for the top-flight Africa competition.

Sarpong is mostly remembered for his famous penalty miss against South Africa during the U-23 Africa Cup of Nations held in Egypt.

He blasted his 12-yard effort over the bar, missing a glorious chance to win the match for the Black Meteors as they lost 6-5 on penalties.

As a result, the Black Meteors failed to qualify for the Tokyo 2020 Olympic Games which was postponed due to the outbreak of coronavirus but it is set to commence next month.