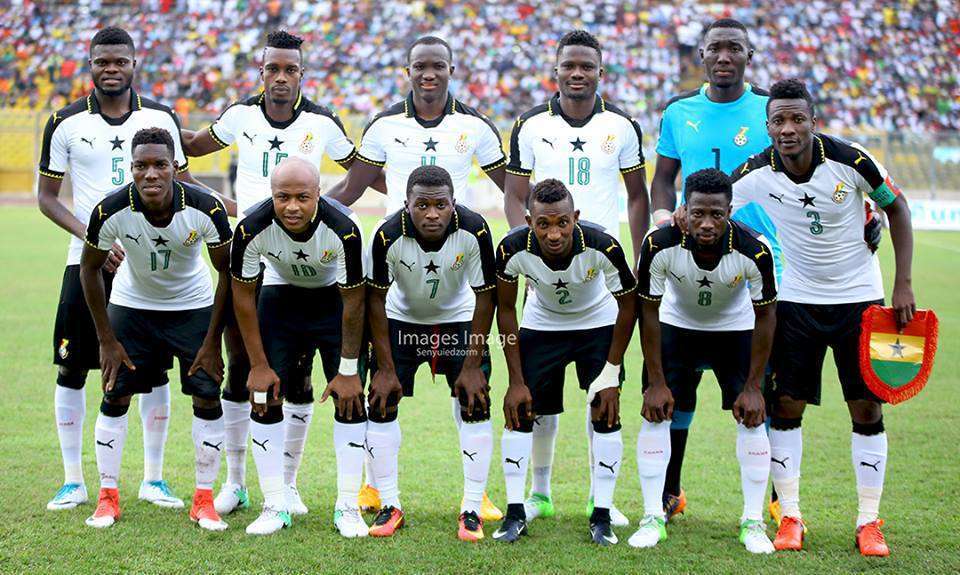 The Ghana national football team represents the country in international association football and has done so since the 1950s. The team is nicknamed the Black Stars after the Black Star in the flag of Ghana.

The team which is the senior national male team of Ghana has seen success in the past and are regarded as one of the best national teams in football.

And due to the production of talents and play, they are tagged as the "Brazil of Africa football."

The Black Stars are currently ranked 52nd in the World and 6th on the African continent.

The current handlers of the National team are all former players of the country. Coach Kwesi Appiah played at left back for the national team from 1987–1992. Assistant coach Ibrahim Tanko, a striker in his days played from 1996–2004, Stephen Appiah former captain of the national team played 67games from 1995–2010 and Goalkeeping coach Richard Kingson kept the post from (1996–2012)

On 19 August 1962 at the Accra Sports Stadium, the Black Stars played Spanish giants Real Madrid, who were at the time Spanish champions, former European champions, and intercontinental champions, and drew 3–3. Goals from Edward Acquah (2) and Edward Aggrey Fynn for Ghana while Ferenc Puskas (2) and Francisco 'Paco' Gento got the goals for Madrid.

After going through 2005 unbeaten, the Ghana national football team won the FIFA Best Mover of the Year Award and qualified for their first cup in 2006.

In 2008, Ghana reached a high ranking of 14 according to the FIFA World Rankings.

The Black Stars went on to secure a 100 percent record in their qualification campaign, winning the group and becoming the first African team to qualify for the 2010 FIFA World Cup.

8. Record appearance at the AFCON semis

Asamoah Gyan's first goal at 2006 World Cup in Germany was adjudged the fastest goal scored in the Mundial. Gyan scored under 2 minutes against the Czech Republic.

The Ghana national football team's football kit for the 2014 FIFA World Cup was ranked as the best kit of the tournament by BuzzFeed.

Asamoah Gyan affectionately known as 'Baby Jet' is the holder of the record with 106 games having scored 51.