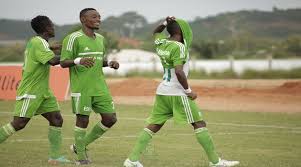 Elmina Sharks has beaten Medeama SC by two goals to one today in a pre-season friendly match as the two teams continued their preparations in anticipation to the start of the upcoming season.

The two teams are hoping to enjoy a successful campaign in the 2019/2020 Ghana Premier League season and decided to engage in a friendly match to give their respective managers the opportunity to assess the quality of their team.

At the end of the friendly match played at the Nduom Sports Stadium, Elmina Sharks has run away with a 2-1 win over Medeama SC which gives them confidence going into the league proper.

In the new season which will start on the weekend of December 27-29, 2019, Sharks will play their first match against Bechem United.

For Medeama SC, they will beseech Ebusua Dwarfs in Cape Coast to kick off their campaign in the Ghana Premier League.