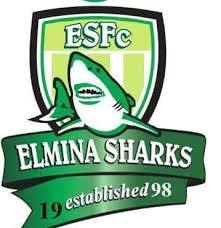 Elmina Sharks Football Club has rubbished reports in the media claiming that players have been evicted from the apartment housing them.

Widespread reports in the last 12 hours have suggested that the owner of a building housing the playing body of the Ghana Premier League club has sent them home packing following the club's refusal to settle some 12-month rent.

Having taken notice of the news, the management of Elmina Sharks have through a statement given clarity to the matter.

In a statement from the club, they have explained that no player has been evicted. Instead, they took the decision not to use the facility anymore and hence decided not to renew the agreement with the owner of the apartment when it elapsed.

“The management of Elmina Sharks and the owner of the property have agreed now not to renew the agreement”, a portion of the club statement has said.

It continued, “The management of the team has decided to house the playing body in the team's own facility when the football season resumes”.

Below is the full statement: 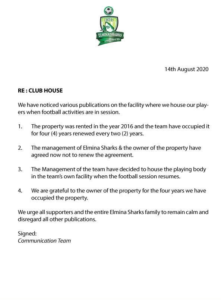