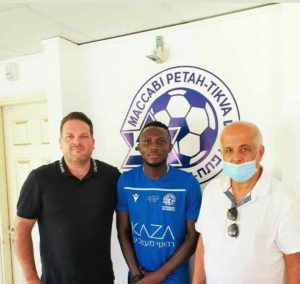 Footballghana.com can officially report that Ghanaian international Elvis Sakyi has sealed his transfer to Israeli side Maccabi Petah Tikva FC.

The club has been chasing the signature of the 23-year old midfielder for the past couple of months.

After successful negotiations between officials of the newly promoted Israeli top-flight, Elvis Sakyi has today wrapped up his transfer to Maccabi Petah Tikva FC.

The midfielder has displayed good quality in the past year during his stay with Maccabi Avshalom Ironi.

His services have now been secured by Maccabi Petah Tikva FC to give them a squad boost in the upcoming football season.

Elvis Sakyi has inked a 2-year contract with his new team that is expected to run until the summer of 2022.

The Ghanaian in the past played for clubs including. Gzira United FC, Sanglea Ath. Larnaka GB, Maltepespor, and Cheetah FC.