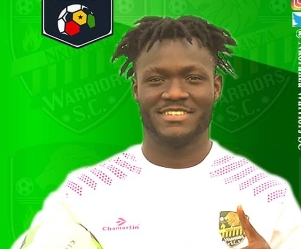 Reliable source indicates that the fire boys are in advanced talks with Nkoranza Warriors in securing the signature of the highly rated midfielder for the 2019/2020 campaign.

The 23-year-old midfield enforcer arrived in Dormaa earlier today to hold talks with Aduana Stars on his personal terms.

Sarkodie has emerged as top transfer target for most premiership clubs including Hearts of Oak, Kotoko and Legon Cities following his outstanding performance in the ongoing Division One League. .

He was reportedly on the brink of inking a deal with Asante Kotoko subject with a mandatory medical test.

Hearts of Oak and Legon Cities also expressed interest in landing the young midfielder from the second-tier club in this transfer window.

He is currently one of the highly-rated midfielders in the second-tier league where he has won eight MVP awards in 13 matches.