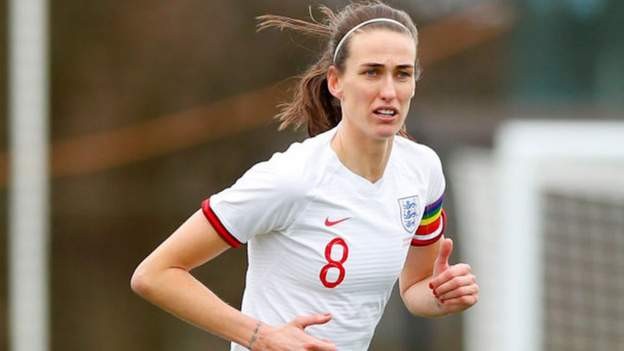 England midfielder Jill Scott says she is "so overwhelmed" by messages she has received after making her 150th appearance in the friendly victory over Northern Ireland.

Among those to send messages were her team-mates, Prince William and former England international David Beckham.

The 34-year-old became just the second player to reach 150 caps for England in the 6-0 win.

Scott had to wait almost 12 months after winning her last cap because of disruption caused by the coronavirus pandemic.

She added: "It's a big sigh of relief after waiting a year for it. I am so overwhelmed. The girls did a big presentation for me last night and it was so uncomfortable because I just had to sit there listening to all these plaudits!"

Scott's career spans almost 15 years and has incorporated four World Cups but she admitted she was "anxious" and keen to "perform well".

"Honestly it feels so odd. I got a handwritten letter from Prince William," she added. "Going back 12 years, maybe, I was at an appearance with him and I slipped in a five-aside game and actually kicked him and he remembers it.

"To get messages like that.. .I haven't even checked my phone yet... But it just seems very surreal. I even got a video message [from] David Beckham.

"He was always a player that I used to look up to and although he was fantastic at putting in crosses and playing for England, I always loved how he was with the fans and that's something that I've always tried to be like. To get [those] messages mean the world to [me]."

Scott also came up against friend and opponent Rachel Furness, who plays for Liverpool and Northern Ireland, but has competed against the England midfielder since "under-10s in the local league" up in the north-east.

She swapped shirts with Furness after the friendly - giving her one of three specially-printed shirts which commemorated her 150th appearance with embroidery.

"It was nice to have that game today. I said to [Furness], 'that's for kicking us for 25 years' so I think she was happy she got that shirt!" Scott added.

Scott also gave "massive thanks" to defender Steph Houghton who passed on the armband for the occasion.

Manchester City striker Ellen White, who scored a hat-trick in the victory, said she was "really proud to have been a part of [Scott's] journey".

"Her career and the longevity of it has been phenomenal. There's definitely more to come and I hope everyone sees how much passion and desire she has for the game and how much she loves playing for England," added White.