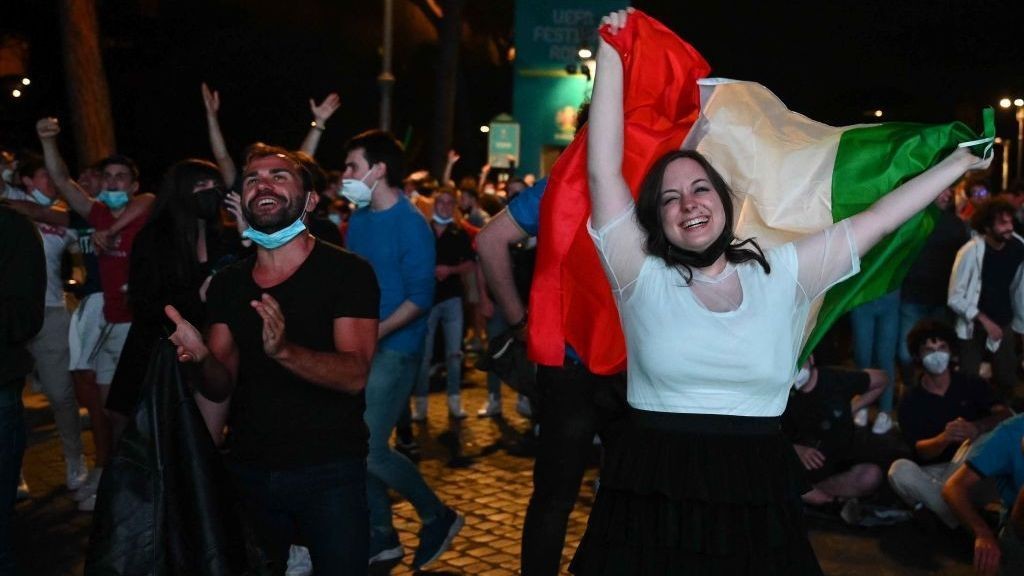 ROME, Italy -- They came early. Of course they did. Some were draped in blue, some wore hats or carried flags, and some even had painted faces peeking out from beneath their surgical masks, but nearly all the fans at Stadio Olimpico on Friday evening showed up well before the kickoff of Euro 2020's opening game between Italy and Turkey.

Now part of that was the magnetic pull of the moment; after a year's delay, no-one wanted to wait any longer for the opening match of this European Championship. But part of it was also was the simple reality of sports in a pandemic world: to maintain proper social distancing at the gates, each fan was assigned a specific 30-minute window in which they were required to enter. Miss your time, the rules said, and you could miss the game.

This duality was everywhere. The players walked to the field together, but did not shake hands. There was an Opening Ceremony with Andrea Bocelli singing the incredible aria "Nessun Dorma," but it also featured a virtual performance by U2. The fans cheered and shouted and whistled, but did so only while sitting in seats that organizers had carefully tagged with oversized green check marks so as to ensure appropriate spacing in a stadium holding less than a quarter of its 70,000+ capacity.

Was it ideal? No. But after seeing Ciro Immobile's perfect poacher's finish, Lorenzo Insigne's crisp curl and an opening Turkish own goal, the Italians in the crowd of 12,916 -- the largest to gather for any event in Italy in a year-and-a-half -- surely went home feeling as though a 3-0 victory was just about perfect.

"I had goosebumps," left-back Leonardo Spinazzola said afterward. "We were already aware we were a very good side, and we did what we had to do."

Italy fans celebrate the start of the Euros, as their team walked to a historic three-goal win for the first time in their tournament history. Getty

Rome may not be the host for the entire tournament -- for the first time, games are being played across the continent, with 11 host cities -- but there was something fitting about the first match being played in the Eternal City. Last February, a Champions League match in Milan between Atalanta and Valencia became the de facto end of the "before times" as days after, the nearby city of Bergamo became the epicenter of the spreading pandemic. In the months since, more than 125,000 Italians have died from the virus and more than 4 million have been infected.

Italy's coach, Roberto Mancini, acknowledged the devastation of the past year in an open letter he wrote to Italian fans earlier this week. "It feels like an eternity ago when we achieved qualification," he wrote of the night in 2019 when his team guaranteed its place in this tournament. "That was when 2020 was meant to be a year of great satisfaction, the year of sharing joy together ... but we all know how that went.

"Sport can bring us many positive emotions," Mancini wrote. "Now, more than ever, we badly need that."

Euro 2020 of kits! Every team's home and away jerseys ranked

How Euro 2020 will cope with COVID

Who are the top young players to watch at Euro 2020?

This game, then -- this whole tournament, really -- was a start. There may not have been the constant revelry in the city center one might see in the days leading up to a Euros match pre-pandemic, but the Italian players nonetheless view themselves as important figures in this country's recovery.

The cover of the newspaper La Gazzetta dello Sport on Friday featured a headline that shouted, "Siamo Tutti Azzurri!" ("We are all Azzuri!") and Italy's captain, Giorgio Chiellini, said he has felt an incredible energy from fans who are ecstatic to have an opportunity to cheer again -- because of the pandemic, yes, but also because Italy missed out on the World Cup in 2018.

"You have no idea how many friends have been galvanized over the past week, with the mood growing of a major competition that Italy haven't experienced for five years," Chiellini said. "We are first up and we can set the tone for the tournament."

They did exactly that. Italy came into the night having avoided defeat in 27 straight matches, not conceding a single goal in its past eight. Mancini's mission since taking over after the failed 2018 qualification has been to remake the overall tenor of the team, and he has stressed the importance of the players enjoying themselves. This should be fun, he has told them, not work. To that end, Mancini has insisted on a lighter mood -- the Italian FA announced its Euros squad on a late-night variety show where, among other things, several players served as backup singers to a musician -- and has made clear that "after everything we have gone through, now is the time to put a smile back on faces."

Friday was the beginning. Italy dominated possession from the kickoff and spent most of the first half pushing Turkey back without ever breaking through. An Italian goal felt inevitable. It finally arrived just before the hour, when Merih Demeral helplessly turned the ball into his own net after Domenico Berardi ripped a cross from close range into the retreating defender's chest.

Italy scores more than two goals for the first time ever at the Euros, beating Turkey 3-0 in the opening match.

It certainly roused the frustrated Italian fans, but the true celebrations began about 10 minutes later when Immobile pounced on a rebound and flicked his shot home to give Italy a proper goal on a night they deserved it. Insigne's goal, which came 11 minutes from time, was just an artful capper.

Despite his peppiness, Mancini is not naive. This tournament will be a slog, particularly after so many top players went immediately from a long and difficult club season straight into preparation for the Euros. Fatigue will be a factor. So too will the strict protocols: teams are operating in bubbles, but Spain and Sweden have already been affected by positive tests before playing a single game. There will, undoubtedly, be issues to navigate.

Just not yet. After the final whistle, the players stood and clapped towards the stands, applauding the fans who got COVID-19 tests, and put on masks, and came to the stadium at just the right time so they could cheer on their team in person.

The fans, shouting with glee, returned the ovation. After waiting for so long, this was the night everyone had been craving.